Wolverhampton Wanderers will travel to Ashton Gate to face Bristol City in the FA Cup fifth round on Sunday.

Wolves are in a very good run of form in the Premier League and progressed to the FA Cup fifth round by beating Shrewsbury Town.

Bristol City, on the other hand, come into Sunday’s game on the back of a 2-1 Championship victory over QPR.

Wolves have no injury problems ahead of Sunday’s game.

Ruddy is Wolves’ cup goalkeeper and he should start against Bristol City on Sunday.

Bennett has been a regular fixture in the team this season and should start the game.

A rock at the back, Coady will be keen to guide his team to the next round of the FA Cup.

Boly has a tendency to be overambitious with his passing at times, leading to loss of possession in dangerous areas. He will have to be extra careful on Sunday.

Doherty scored twice in the FA Cup victory over Shrewsbury last time out. He should start in his usual position at right wing-back.

Vinagre is an exciting player who should start ahead of Jonny Castro at left wing-back against Bristol City.

Another promising talent, Gibbs-White could start in central midfield and look to take control of the game from minute one.

Saiss should partner Gibbs-White in the middle of the park, adding energy and physicality to the team.

Traore has failed to make much of an impact since joining from Middlesbrough in the summer. However, the former Barcelona prospect will aim to impress Nuno at the weekend.

Costa has been inconsistent for Wolves in the Premier League. But, he’ll likely get the nod ahead of Jota at Ashton Gate.

Read more: This Wolves team would reach a whole new level in the PL if they sign this AS Monaco star in the summer – opinion

Cavaleiro could be asked to lead the attack as Raul Jimenez deserves a rest. 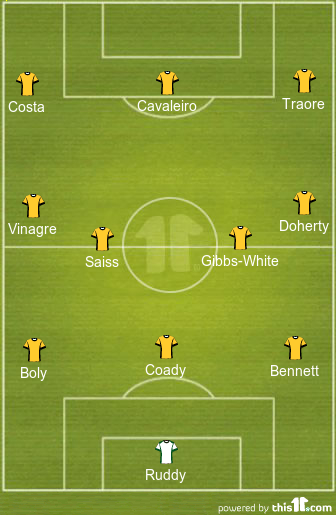