An in-form Sheffield Wednesday welcome another in-form team Middlesbrough to the Hillsborough Stadium for a Friday night game. The home team are unbeaten in the last four league games, meanwhile, the away team lost their previous game but are in good shape overall. It is a battle of sixth versus fourth in the table, hence, expect a tight affair.

Jos Luhukay’s men began the season in a twitchy manner but are regaining form and control. Therefore, they will be coming into this game with confidence. Being at home, the Owls may also fancy taking the game to Boro.

Almen Abdi is back in training and might be considered for the squad on Friday. Barry Bannan and Marco Matias are most certainly out for this game. Joost van Aken, Kieran Lee and Garry Hooper are out for a few weeks.

The goalkeeper has been solid between the sticks for the Owls this season.

Since switching to a back-three, captain Lees has looked comfortable in the right-hand side of the defence.

Hector has been in good form. Return to a back three formation has worked because he looks secure there.

The experience of Pudil is key to the team. The centre-back position suits him well.

Palmer gets the freedom to move forward and influence the attack. He also tracks back when required. Hence, this 3-4-3 system is good for the player.

The youngster, who is on loan from Tottenham Hotspur, should start this game as he did against Bristol a fortnight ago.

With Bannan injured, we may see Pelupessy starting in central midfield alongside Onomah.

Generally a full-back, Penney was used at left-wing against Bristol and the youngster struggled a bit. Expect him to return to left-wing back.

Scored both goals in the last game to win three points for the team. Expect him to start on Friday night.

The Argentine did well after coming on against Bristol. Luhukay may give him a start ahead of Steven Fletcher.

Read More: Why Sheffield Wednesday could make a huge statement by signing this two-time PL winner in January

Reach’s form in the past few weeks has been good. His goal against Leeds United would be remembered for years to come. 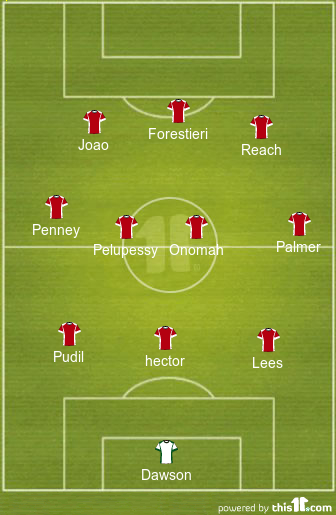