Predicted Sheffield Wednesday line-up to face Blackburn in the Championship

Sheffield Wednesday would be hoping to continue the positive form which they gained on Tuesday when they face Blackburn Rovers at Ewood Park this Saturday. The Owls defeated fellow strugglers Bolton to gain a few steps in the table and create a gap with the teams down at the bottom.

They now need to keep picking up points to remain ahead of the danger zone. Jos Luhukay’s men are up against a Blackburn team who have won just once in their last six league games. Hence, we can expect Rovers to be up for it this weekend, meaning it won’t be easy for Wednesday.

Steven Fletcher had a knock, which saw him last only 35 minutes against Bolton. He is a doubt for this game. Sam Winnall will make a come back by early December, while Gary Hooper and Kieran Lee are long-term absentees.

His saves are important for the Owls. The penalty save against Sheffield United would still be fresh in the minds of many supporters.

The captain scored the winner against Bolton and looks more secure when playing in a back-three.

Just like Lees, Hector also feels comfortable when playing in a back-three system. Probably suits the style of play.

On current form, Thorniley looks a better player irrespective of whether he is playing at full-back or as a wide centre-back.

He has been good in the last few games, going forward when required and defensively solid as well.

His best performance against Bolton was probably his best of the season. Luhukay would be hoping he continues to deliver the goods.

The key man for the Owls in central midfield. His creativity and hard work are important to the team.

The youngster struggled a bit against the Wanderers, however, he is better as a left wing-back.

Reach always works hard on the ball to create an opening for the team. He is such a threat to any team in the league.

Improved as the game went on against Bolton. Wednesday fans would be hoping for more from the attacker.

With Fletcher in doubt for this game, we may see Joao leading the line on Saturday. 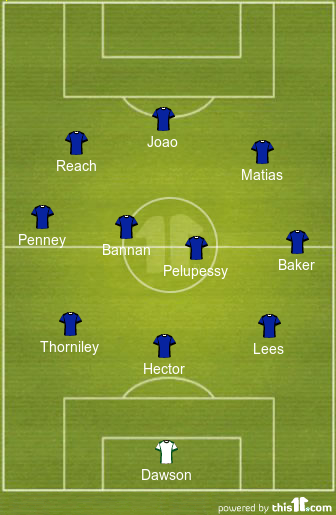