A struggling Hull City face an in-form Sheffield United at the Bramall Lane this weekend. Nigel Adkins’ men did well against Leeds United but eventually lost the game 1-0 at home. They are now placed 21st on the table, which doesn’t sound great for their season.

The Tigers will now face a Sheffield United team that has won its last three games on the spin to move to 3rd place on the table. Hence, this is a game which would be very tough for Adkins’ men to even try and get a point.

Hull head coach Nigel Adkins has revealed midfielder Jackson Irvine could play against Sheffield United and George Long could make it to the squad. James Weir and Angus MacDonald are out for this game while Goebel Evandro and Jordy de Wijs are out for the whole month. Ondrej Mazuch is back in training and it remains to be seen whether he will be considered or not.

One of the consistent performers in the team for the Tigers. His saves are important in games.

The youngster has regained some form in the past few weeks. Should start this game.

Since his arrival at the club, Elphick has done very well to settle in and command the back-line for his team.

The American is one of the better performers in the Hull team this season. His versatility is key too.

Kingsley did well against Leeds, but his final product in the final third wasn’t great. Should start this game.

Stewart may get another chance to show that he can do well for the team. The former Liverpool man hasn’t looked great until now.

The skipper has been decent this season but the team would want more from him in the upcoming games.

The youngster is better off staying on the right wing to attack from the wide areas.

The Pole has been growing in confidence after his first start of the season against Middlesbrough last week. He should start this game.

The youngster has been one of the consistent performers this season. His runs in behind the defences are always an outlet for the team.

The experienced striker struggled against Leeds because he was left isolated. He would need support from the players if Hull are to score goals. 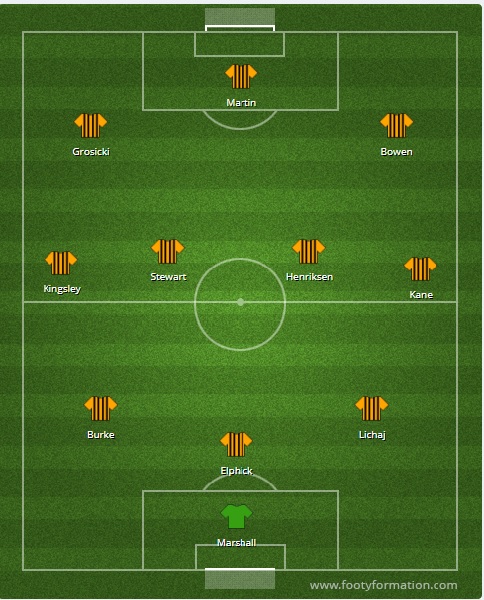