Predicted Wolves line-up to face Tottenham in the league

Wolves would be aiming to get back to winning ways when they face Tottenham Hotspur at the Molineux in a Saturday midnight Premier League clash. Nuno Espirito Santo’s men lost the previous games to Watford and Brighton. Probably the reality of this league struck them a bit after a dream start.

They will be looking to put that behind and put up a better performance against a very good Spurs team. The Londoners lost at home to champions Manchester City, hence, they will be also be itching to get back on winning ways. All in all, an enticing encounter is on the cards.

Wolves and Nuno are lucky to know that they do not have any injury concerns to deal with.

The Portuguese international has been in great form for the Old Gold upon his arrival this summer.

He is a part of the defence which is been solid throughout. Even they lost the previous two games, the centre-backs have been good.

The captain could have done slightly better to stop Glenn Murray from scoring last week, however, he has led the side well and is a commanding presence at the back.

The Frenchman is a solid defender and is great on the ball. His partnership with the other two is just fantastic.

The endeavour to go forward to help the attackers and also have the defensive diligence is something Doherty possesses in abundance. A key player in the team.

Had a better game against Brighton after struggling versus Watford. Moutinho’s know-how and experience is a must for Wolves.

The youngster continues to impress every time he steps onto the pitch. One of the important players in the team.

The Spaniard’s performances have been consistent this season. In fact, he has excelled in the left wing-back role.

He has shown that he can be a threat to the opposition but the final product is lacking. Nuno would be hoping for more from the Portuguese.

The Mexican couldn’t do well against Brighton last week. But he is still a good striker who can cause plenty of problems to Spurs’ defence.

Read More: Why Wolves avoiding this 25-year-old Sheffield Wednesday star would be better for all parties involved

He sat out in favour of Adama Traore in the last game but the latter couldn’t unleash his pace enough. As a result, we may see Jota back in the line-up. Traore is good from the bench as an impact player. 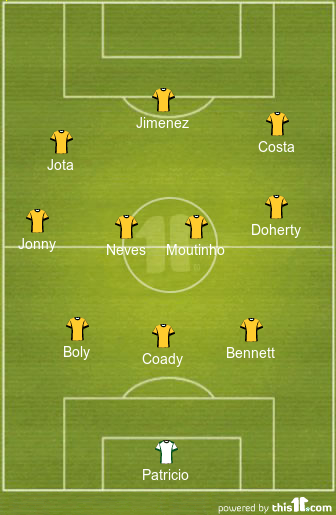