Predicted Wolves line-up to face Newcastle in the Premier League

Wolves will be aiming to continue their positive momentum when they face Newcastle United at St. James’ Park this Sunday in the Premier League. Nuno Espirito Santo’s men showed immense character by coming from a goal down to beat Chelsea on Wednesday. That ended their rot of six winless games, which would be a relief for the Old Gold.

They are up against a Newcastle side who dug in deep to get a point away at Everton. Rafa Benitez’s men have taken 10 points from their previous five games, a sign of a team in upward trajectory. Hence, it won’t be easy for the Old Gold this weekend.

Jonny Otto is the only first-team player injured for Wolves at the moment. The Spaniard is expected to be back by boxing day.

The Portuguese was back at his best against Chelsea and that would have delighted the manager who was a goalkeeper himself during his playing days. Patricio starts every league game.

Bennett continues to impress on the right-hand side of the defence. His last-gasp challenge on Willian on Wednesday was a marker. Should start on Sunday.

The captain has been solid this season apart from one or two iffy moments. He leads this team in the right manner on the field.

The Frenchman is a solid presence at the back. His passing from the back is accurate as well.

The buccaneering wing-back will look to make forward runs into the Newcastle half to cause them trouble.

The youngster was suspended against Chelsea but he should be back in the line-up on Sunday.

After a few ordinary games, Moutinho was back at his best against the Blues. Expect him to play alongside Neves this weekend.

With Jonny out, expect Vinagre to continue to deputise for the Spaniard. The Portuguese had done well so far.

The Portuguese scored against Chelsea and looked really threatening. His good form in the final third would be key in the upcoming games.

The Mexican scored on Wednesday and that should enhance his confidence going into the game on Sunday.

Read More: Wolves made a blunder by offloading star man for £3m in the summer and they must make amends by re-signing him in January

He didn’t start against Chelsea but expect him to do so against the Magpies. 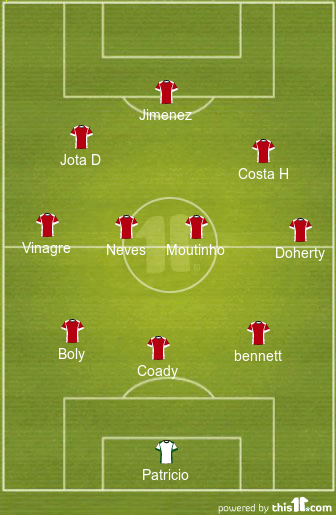