Wolves would be aiming to get back to winning ways and end their run of five games without a win when they face Cardiff City in Wales on Friday night. Nuno Espirito Santo’s men were uninspiring in their previous game, which they lost to Huddersfield at home.

They were slightly unfortunate to not get a point against Tottenham and a win against Arsenal, but there was no excuse against the Terriers. The Old Gold are now up against Cardiff who also lost their previous game, to Everton. Hence, it is expected to be a tight affair between two newly promoted teams.

Jonny is out and will only make a return by the end of next month. Other than that, Nuno has a wide enough squad to pick his line-up from.

The Portuguese could have done better to stop the Huddersfield last weekend. He will be looking to improve his performance level.

He has been a solid presence at the back for the team. The consistency will be key in a tough period of games.

The captain was well below his usual standards on Saturday. He must lead the side in the right manner as they seek to break the winless run.

The Frenchman was at unease against Huddersfield, which was uncharacteristic of him. He will be looking to improve this Friday.

His forward runs from the wing-back position help the team in the final third. The Irishman is no slouch when it comes to tracking the runs either.

The game against Huddersfield was Moutinho’s most ineffective one since his arrival at the club. He will be looking to get things right.

The youngster has struggled for form in the past few games, as a result, the team is losing games. Nuno would be hoping that the Portuguese retains his fine touch in the midfield.

Vinagre struggled at left wing-back, covering for the absence of Jonny. He needs to improve as the latter is out until mid-December.

The Portuguese was excellent against Arsenal, but not so much against the Terriers. He will be aiming to improve.

While his hold up play is good, the Mexican has missed a lot of chances this season. Wolves fans would be hoping that he brings his shooting boots on against Cardiff.

Read More: Wolves beating Everton to splash £25m on this in-form Ligue 1 with 11 goals would be a statement of intent

Ivan Cavaleiro really struggled to impact against Huddersfield, hence, we may see Jota back in the line-up. 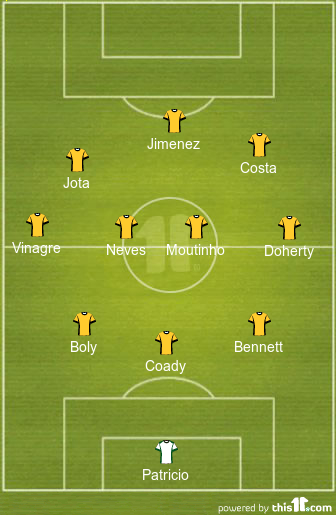