Predicted Wolves lineup to face Arsenal in the Premier League

Wolves would be aiming to put a stop to their three-game losing streak when they face an in-form Arsenal team at the Emirates stadium this Sunday. Nuno Espirito Santo’s men were wasteful in front of goal in a narrow 2-3 defeat at the hands of Tottenham last Saturday.

And if they are to get something from another match against a north London team, they should be good in all departments of the game. The Gunners on the other hand, have been on fire after the early defeats to Manchester City and Chelsea, hence, the size of the task for the Old Gold.

Diogo Jota missed out on a place in the squad last week and remains to be in doubt for the Sunday game.

The Portuguese shot stopper has been in reasonable form this season, making vital saves for the team when required.

Wolves’ defence has been pretty solid this season and Bennett has played a huge part in it.

The captain must now lead the side well to make them stop this losing run. He is been decent in central defence and should start against a fiery Gunners attack.

The Frenchman needs to be at the top of his game alongside others in order to keep a clean sheet at the Emirates.

The attack-minded wing-back has been in good form on both sides of the field.

The experienced Portuguese has found it slightly tough going in the previous two to three games. As a result, Wolves are a bit loose in midfield. However, his presence could be key in such a tough away game.

The youngster continues to be the talisman of the team, making the ball talk in central areas of the pitch. He needs to quicken up his game a bit in order to play against Arsenal.

Jonny has kept his place at left wing-back and secured it with good performances. He is almost certain to start on Sunday.

With Jota still in doubt, Cavaleiro may get his second Premier League start on Sunday.

The Portuguese has been decent with the ball, however, the final product is lacking at times.

Read More: Wolves’ goal-scoring woes would vanish if they capture this Liverpool outcast in January

The Mexican has led the line well but he needs to score more goals in order to harness more impacts in the games. 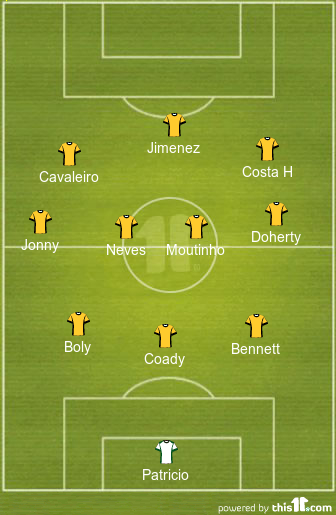