Predicted West Brom line-up to face Reading in the Championship

West Bromwich Albion played out a thrilling 2-2 draw against Sheffield Wednesday in midweek. The Baggies now drop to fourth place, with Leeds United, Middlesbrough and Sheffield United moving above them.

Darren Moore’s men return to take on Reading in the Championship this weekend. The Baggies will be aiming to return to winning ways in order to maintain the pace at the top.

New signing Bakary Sako will be unavailable due to an injury. Matt Phillips is close to a return but there’s no guarantee if he’ll play a part. Apart from that, West Brom have no other injury concerns at the moment.

He has been excellent in goal for the Baggies this season. The youngster will definitely continue to feature for them.

The youngster has impressed in patches this season but needs to show more consistency in his displays.

West Brom’s leader at the back will definitely play a huge role in getting them back to the Premier League next season.

Bartley has looked good at the back after making the move from Swansea City this season. He will complete the back-three.

Injury to Matt Phillips saw Mears receive an extended role in the squad. He should continue on the right-hand side of the midfield.

Livermore will add a sense of stability and security in the middle of the park for the Baggies.

Brunt’s deliveries have improved in the last few games but he needs to show more urgency in the final third.

Gibbs has been a standout performer for West Brom this season. He will definitely play a crucial role for Moore.

Barnes scored a superb goal in the last game and capped off an impressive performance. He really is flourishing in this side.

Rodriguez finally looks like his old self and has been extremely clinical in the final third. He will lead the line in this game as well.

Robson-Kanu should take the place of Dwight Gayle for this fixture in order to provide him with some rest. 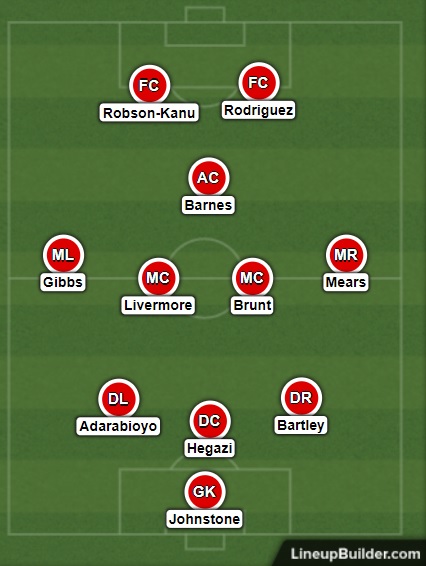