Tottenham would be aiming to keep their winning run in the league going when they face an in-form Burnley side at Turf Moor this weekend. After losing to Manchester United mid-January, Mauricio Pochettino’s men have won their last four league games and are third on the table just five points behind leaders Manchester City.

They are up against a Burnley team who haven’t lost a league game since Boxing Day. As a result, Sean Dyche’s men are 15th on the table, three points away from the danger zone. It was not long back when they were languishing at the bottom and hence, expect a tight contest between two in-form teams.

Harry Kane and Dele Alli have recovered well and are in line to return to first-team action ahead of schedule. However, playing against Burnley would be touch and go. Ben Davies still doesn’t have a return date and would take longer.

The Frenchman was in herculean form in the previous league game against Leicester. If fit, he starts every league game.

He played on the left-hand side of the back-three against Dortmund but he should be back on the right-hand side this weekend.

The Colombian star has been a regular starter as a part of the back three. That is expected to continue against Burnley.

The Belgian was fantastic at left wing-back in the Champions League game, however, expect him to slot back in his slightly more natural left centre-back role.

The Englishman didn’t play against Dortmund and should start
against his former club ahead of Serge Aurier.

The Frenchman isn’t pretty on the eye but does the job effectively in the midfield. His presence will also help Spurs nullify the aerial threat of Burnley.

Winks has nailed his spot in the team with consistent performances. The Englishman should keep his place in the team ahead of Eric Dier this weekend as well.

Rose didn’t feature in the Dortmund game and could start at left wing-back this weekend.

The Dane would be aiming to play in between the lines and find the space to create goal-scoring chances for the two strikers up front.

The South Korean star has been in fantastic form since his return from Asian Cup duty. Burnley defenders would be wary of his threat.

With Kane inching closer towards fitness, this could be the last chance for Llorente to impress the manager before the England captain takes over the striker role. 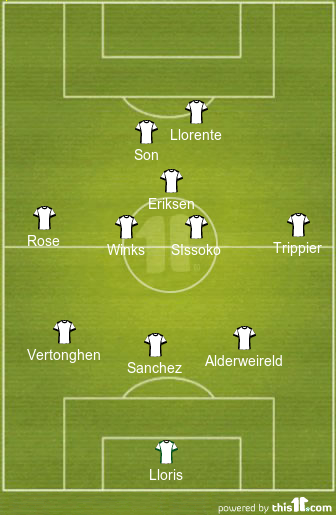