After losing two games in succession, Sheffield Wednesday would be looking for a response when they meet Birmingham City. The Owls lost their previous game to QPR and find themselves 14th in the table, five points off the playoff spot.

They now face a very tough task of playing a Birmingham team who are unbeaten in the last 10 games. Jos Luhukay and his men will need to pull a rabbit out of the hat to get something out of the game on Saturday.

Fernando Forestieri, Gary Hooper and Kieran Lee are out for the long-term. Marco Matias could be back in action next week.

Dawson has been a steady figure in goal for Wednesday this season. Expect him to play most games.

Lees was benched against QPR and the change in formation didn’t work for Luhukay. The captain should be back in the line-up for this game.

Hector has been decent at the back since receiving the starting role. Back-three suits him better.

The experience of Pudil would be required at the back when playing an in-form team away from home. He was kicked in the head on Tuesday but should be fine for this game.

The 21-year-old may find it easier playing at right wing-back because he can make forward runs more often than not.

Bannan has been one of the key players for the Owls this season. He has had a little dip in form, however, the expectation is that he will get better again.

Played in a slightly advanced role against QPR and it didn’t quite work. It would be better if the manager deploys him in a rather orthodox midfield role alongside Bannan.

Penney would be a better choice if Luhukay chooses to change the formation. The youngster can move forward from left wing-back and put dangerous crosses in.

The 25-year-old has been in good form in the past few weeks. Luhukay would be hoping for more against a tough opposition.

Was unlucky not score on Tuesday when his header hit the crossbar. Should try to put one past the keeper on Saturday.

Read More: Why Sheffield Wednesday could make a huge statement by signing this two-time PL winner in January

Fletcher was on the bench against QPR, however, he is expected to be back in the line-up. 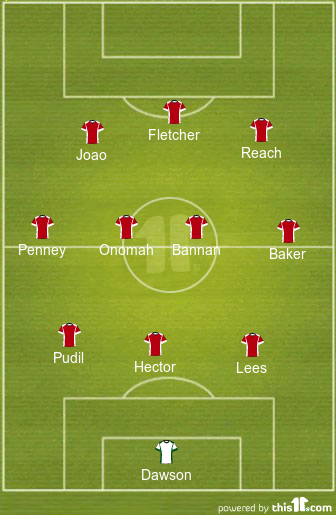