After conceding a late equaliser against Wolves 10 days back, Newcastle United will be aiming to get back to winning ways, when they face Huddersfield Town at St. James’ Park this Saturday.

The Magpies have done well in the past couple of months after a disastrous start to the season. They are currently 16th in the table, just one point ahead of the danger zone.

This weekend, Rafa Benitez’s men are up against a Huddersfield side who are at the bottom of the table and are 14 points away from the safety zone. Hence, on paper, it looks winnable for Newcastle, however, nothing can be taken for granted in the Premier League.

Mohamed Diame and Ki Sung-Yueng are back to full fitness and are expected to feature in the squad this weekend. Jonjo Shelvey is making his recovery but is still not ready for first-team action. Paul Dummett is another player who might miss this game.

Though the Slovakian was in fault for the goals conceded in the last two games, he is one of their vital players and should start on Saturday.

The American international is a regular on right-hand side of the defence and that trend should continue this weekend.

The Swiss international has done well in the past few games and should start as a part of the back three.

The captain would be looking to keep the back-line together and aim to keep a clean sheet on Saturday.

Since coming back from injury, Lejeune has been a solid presence at the back. He is a certain starter in the team now.

New signing Antonio Barecca is still adapting to the new league and may not be rushed into the starting line-up. Hence, we could see Ritchie continue plying his trade at left wing-back.

The youngster has been a fantastic presence in the midfield ever since he got the chance. He is expected to keep his place this weekend as well.

Isaac Hayden has done admirably well in the absence of Diame, however, the latter was the best midfielder in the team before his injury and should start on Saturday.

The Spaniard’s goal-scoring hasn’t been prolific but he contributes to the team in many other ways. He is expected to start on the right wing.

There might be a temptation from the manager to hand new signing Miguel Almiron the start. However, waiting for one more week could be a wise move. Hence, Atsu, who has done well in the past month or so, should get the nod.

He is the undisputed first-choice striker in the team who starts in almost every league game. 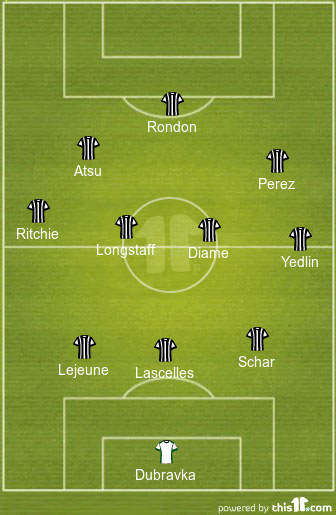