Hull City will be seeking to get over the loss at the weekend and perform better when they face league leaders Norwich City at the KCOM Stadium on Tuesday night.

Nigel Adkins’ men were disappointing in their 0-2 loss at home to Nottingham Forest, and the manager should be aiming to better their performance this midweek.

The Tigers are up against the league leaders though, hence, it won’t be an easy game by any stretch of the imagination. They can just hope to defend well and create a chance or two.

James Weir and Jon Toral are back in training but might not make it to the matchday squad on Tuesday. Nouha Dicko is still out for a few days. Evandro, Angus MacDonald and Stephen Kingsley are long-term absentees. Dan Batty is a doubt for this game.

The experienced shot-stopper is one of the key players in the Hull team. His saves are always so crucial to the team.

He has done a decent job at right-back but the Tigers look weak with four at the back. Hence, we might see Burke as a wide centre-back.

The loanee from Aston Villa has done a good job in central defence. Playing in a back-three would suit him better.

de Wijs needs to improve markedly, failing which the Tigers will continue to concede goals in abundance.

Kane’s presence at right wing-back would help the team to attack the wide areas of the pitch.

With Batty a doubt for this game, we may see Stewart in the midfield.

The Aussie looked a bit jaded on Saturday, hence, the dip in his performance level. He cannot afford to be the same against Norwich.

The experience of Lichaj at left wing-back would help the team and also aid de Wijs on the left-hand side of the defence.

He wasn’t good against Nottingham but Hull fans would be hoping he performs better against the Canaries.

He is one of the best attacking players the Tigers have in their team. As a result, he should play just behind the striker in this 3-4-2-1 formation.

Read More: It is high time for Aston Villa recall their on-loan star to solidify their defence

Fraizer Campbell picked up his fifth yellow card of the season, meaning he is out for this game. Hence, Martin should start. 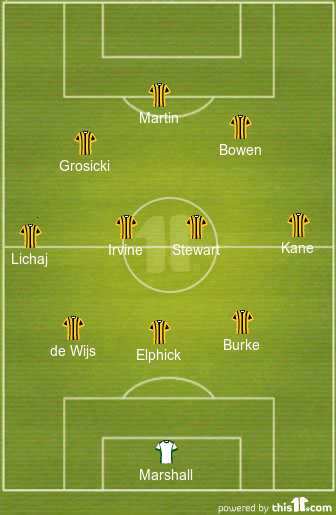