Chelsea travel to St. Mary’s to face Southampton on Sunday, hoping to make it two wins on a bounce in the Premier League.

The Blues have been extremely inconsistent but did beat Wolves 5-2 on their last away day in the league and Frank Lampard will be looking to continue that kind of form. They will be on a high after overcoming Lille 2-1 in the Champions League on Wednesday.

Southampton, meanwhile, are yet to win at St. Mary’s Stadium in the Premier League so far this season, picking up just one point at home.

Emerson Palmieri picked up an injury while on international duty last month and will be out until after the next international break. Antonio Rudiger has injured his groin again and is currently ruled out for Sunday’s trip to Southampton.

Meanwhile, Ruben Loftus-Cheek and Marco van Ginkel are long-term casualties for the Blues.

Kepa is Chelsea’s undisputed no.1 and he’ll keep his place in the team.

James has made an instant impact since returning from injury, providing a lot of attacking flair than Azpilicueta from right-back.

Azpilicueta did well in central defence against Lille and should start at Southampton on Sunday.

Zouma has been inconsistent for Chelsea this season. However, he’ll look to stamp his authority in the game against the Saints.

Tomori has done so well since given a chance in the first-team. A strong defender with good pace and aerial ability, he is a certain starter at St. Mary’s Stadium.

The wing-back role suits Alonso as it gives him the license to move forward without being much concerned about the defensive duties.

Kante had been struggling with a hamstring injury but played 90 minutes against Lille which is great news for both player and club.

Jorginho has been one of Chelsea’s best players this season. He is an undoubted starter for the upcoming Premier League game.

Willian vindicated his selection at Lille with a thumping volley that handed Chelsea a vital win in the Champions League. The diminutive Brazilian could be rewarded with another start at the weekend.

Mount has been fantastic so far this season, adding creativity, flair and goals to Lampard’s Chelsea. He’s certain to start at Southampton.

Abraham scored in the 2-1 victory over Lille in France and will be raring to get himself on the score-sheet against Southampton as well. He will lead the Blues’ attack on Sunday. 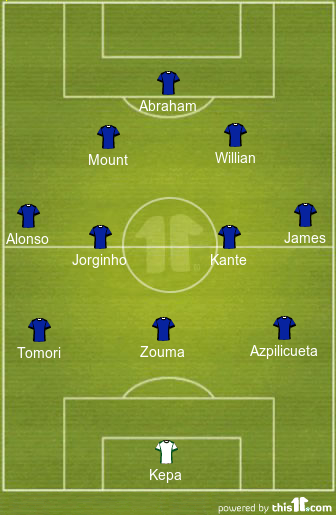