After getting the better of Napoli in the first leg at the Emirates, Arsenal would be aiming to finish the job at Naples and reach the semi-finals of the Europa League.

The Gunners won 2-0 last Thursday, the key being not conceding an away goal. However, it is clear that holding onto a two-goal lead, especially given their away record, might be tough. Hence, scoring an away goal is a must for Unai Emery’s men, or things might go out of hand.

Napoli are a different gravy at their home ground and would give their best shot to notch up the goals and put Arsenal under immense pressure. All in all, expect a gruelling second leg of this last-eight tie.

Rob Holding, Hector Bellerin and Danny Welbeck are long-term absentees. Lucas Torreira had a slight problem and was substituted at half-time against Watford. However, he would still be ready to start on Thursday.

He is their Europa League keeper and is expected to be in goal on Thursday.

He played well against Watford when the pressure was on. Napoli will be a different test though. The German needs to be at his best.

The Greek international has been a solid presence at the back for the Gunners. After sitting out the league game due to suspension, he is expected to slot back into the XI.

The captain is back in full fitness and played well in the last two games. The Gunners fans would be hoping he leads the team from the back in this tough game.

The youngster has been in good form at right wing-back and should continue to keep his place in the team.

The Uruguayan was subbed off at half-time on Monday as an injury precaution. He should be fit to start on Thursday.

The calmness and defensive nuance of Xhaka would be required in a game where Arsenal would have to be defensively disciplined.

Monreal could be picked ahead of Sead Kolasinac because the former is better defensively. The latter can go forward but leave spaces in behind.

The Welshman would be looking to join the attacks from the inside left channel. He is in good form and Napoli would be wary of that.

The Armenian star has done well in the past couple of months and should get the nod ahead of Mesut Ozil. He can track back to help the defence and be a threat on the counter.

The Frenchman was rested on Monday, probably in the wake of this game. He could be leading the line for Arsenal at Naples. 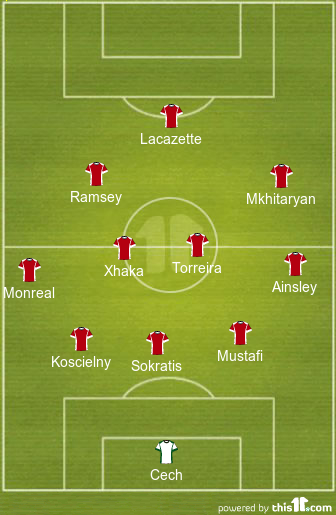