Predicted Arsenal line-up to face Brighton in the Premier League

Arsenal will be aiming to keep the winning form they picked after beating Burnley on Saturday when they face Brighton away at the Amex Stadium this Wednesday. The Gunners got the better of the Clarets in a tight game at the Emirates to go level on points with fourth-placed Chelsea. They have a chance to put pressure on the Blues as they play earlier than their London rivals on Boxing day.

However, a game against Brighton away from home is always tricky for any team. Arsenal endured a defeat there last season, hence, they must look to go there and extract revenge in the best possible manner and win the game.

Shkodran Mustafi is still nursing a hamstring strain and will undergo a late fitness test for this game. Hector Bellerin is in the same boat, while Nacho Monreal looks out for Wednesday. Rob Holding is out for long-term, while Henrikh Mkhitaryan is out for this game.

The German has done well after being given the first-choice role in goal. He starts every league game now.

The Swiss could play as a wide centre-back in a three-back formation. A system which suits Arsenal.

The Greek was bullish against the physicality of the Burnley strikers. He has been a good addition to the squad thus far.

Playing Granit Xhaka in central defence has affected the midfield balance of the team. Hence, Koscielny should come back into the line-up.

The youngster did very well against the Clarets. Expect him to keep his place in the team.

The Uruguayan didn’t start the game on Saturday. He could do that on Wednesday though.

The Swiss in the midfield is a better proposition for the team. Emery should abide by that.

The Bosnian was fantastic, bullish and full of running against Burnley. More of the same can be expected against Brighton.

The Gabonese has been in great form in front of goal and his link-up play with Lacazette is pretty good.

The Frenchman is a real menace for the defenders with his movement and great understanding with Aubameyang.

Ozil pulled the strings against Burnley, justifying that he should play more often. He is expected to start on Wednesday. 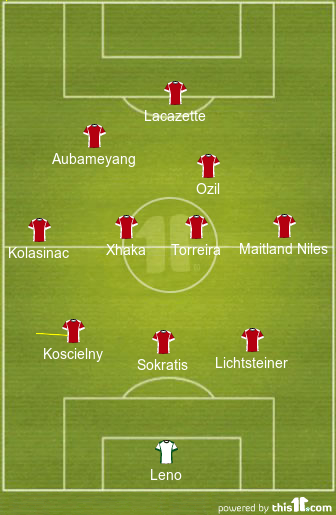