Tottenham travel to Anfield to face Liverpool on Sunday as Mauricio Pochettino hopes to get back to winning ways in the Premier League.

Spurs strolled to their first Champions League win of the season against Red Star Belgrade to give their troubled season a much-needed shot in the arm. The 5-0 victory in the Champions League certainly must have boosted the confidence of Mauricio Pochettino’s men ahead of the tough trip to Anfield.

Meanwhile, Liverpool’s 17-game winning run in the Premier League came to an end last Sunday after they drew 1-1 with Manchester United.

Ryan Sessegnon is still sidelined with a hamstring problem, while Hugo Lloris is not expected to return to training before the end of 2019 after suffering an elbow injury.

Meanwhile, Giovani Lo Celso made his long-awaited return from injury as a substitute in the 5-0 victory over Red Star Belgrade.

With Lloris a long-term casualty, Gazzaniga is set to continue in goal for now.

Aurier has never been a right-back that is defensively sound enough to deal with tricky opposition. The right wing-back position, however, will suit him at the weekend.

Alderweireld was given a night off against Red Star Belgrade, with Pochettino opting for Davinson Sanchez in defence alongside Jan Vertonghen. However, the Belgian will return to the starting XI on Sunday.

Sanchez has been poor at the back so far this season but a clean sheet against Red Star Belgrade would give him a lot of confidence ahead of the Liverpool game.

Like other defenders, Vertonghen has been subpar but he’ll need to be at his best to keep the Liverpool attackers at bay.

Ben Davies enjoyed a run out in the Champions League, so Pochettino could go with Rose at left wing-back against Liverpool.

A tireless worker off the ball, Sissoko will be tasked to stop the Reds attacks from developing.

Ndombele has the passing ability and speed of thought to make a real difference for Spurs in the final third.

Alli’s form has been miserable over the last 18 months or so at Tottenham. The England international will need to up his game and deliver the goods against a strong Liverpool side.

Kane scored a brace in the Champions League on Tuesday and will be eager to get on the score sheet at Anfield as well.

With his pace, dribbling skills and direct running, Son could cause a lot of problems to the Liverpool backline. The South Korean will start up front alongside Kane. 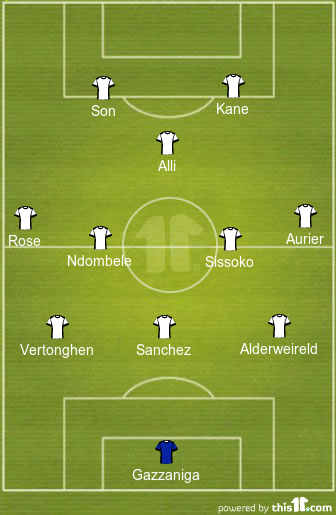