After making it to the quarter-finals of the Champions League, Tottenham would be aiming to get back to winning ways in the league when they face Southampton at the St.Mary’s Stadium this Saturday.

Spurs haven’t won a league game in the last three fixtures, leaving them way behind in the title race and in the race to finish in the top-four.

However, their performance against Dortmund away from home was full of character as they managed to keep their European dreams alive.

This weekend, Tottenham are up against a Southampton side who have been in decent enough form under Ralph Hasenhuttl and are currently two points clear of the drop zone.

Dele Alli is still a bit away from being involved in the first-team. Kieran Trippier didn’t travel to Germany because of his questionable performances recently, and not due to any injury issue.

The Frenchman was on top of his game against Dortmund, hence, he is back to his best coming into this match on Saturday.

He was involved in a back three that didn’t concede a single goal in the away game against Dortmund. That would be a confidence booster and he should start this game.

The Colombian has been in good form at the back and should keep his place in the team.

Vertonghen is a colossus at the back for Spurs, whether he is playing as a wide centre-back or as a wing-back (like he did against Dortmund at Wembley). The Belgian’s place is more or less cemented in the team.

Trippier was deservedly dropped from the team after two meek performances against Chelsea and Arsenal. Aurier stepped up and did well at Dortmund. Hence, the latter should keep his place.

The Frenchman has been a strong presence in the midfield for Spurs and his consistency is laudable. He is probably one of the first names on the teamsheet now.

Harry Winks just came back from injury and played the game on Tuesday. Hence, we could see Dier getting a chance on Saturday.

He was lucky to escape without a red card against Arsenal. The Englishman is expected to play this weekend.

Against an expectedly deep-defending Southampton team, Eriksen might have to bring out his guile and precision to pick out the right passes in the final third.

The England captain scored the all-important away goal against Dortmund and has been in good scoring form since coming back from injury. No one is ever going to dispute his place in this Spurs team.

His pace in behind and direct approach with the ball may hurt Southampton big time. The South Korean hasn’t scored a goal in four games, which, by his standards, would feel like a drought. Expect him to break that on Saturday. 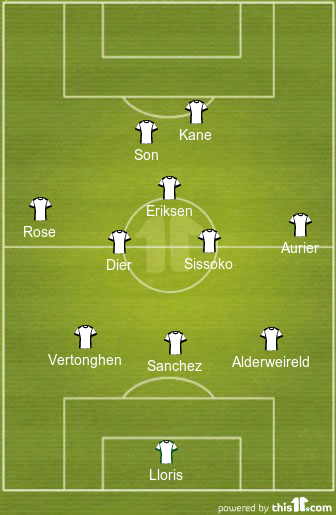