After stuttering in the league in the past few weeks, Tottenham will be aiming to complete the job in leg of the Champions League round of 16 clash against Borussia Dortmund.

Spurs are coming into this second leg away at Signal Iduna Park with a 3-0 advantage, hence, in a way, they have a clear upper hand. But the German side a different gravy at home.

Thus, expect a tight encounter with BVB giving it their all to make a come back.

Harry Winks didn’t feature against Arsenal due to a hip problem. It will be touch and go for him for the Dortmund game. Dele Alli is still a bit away from being considered for selection.

Eric Dier has had illness issues and there is no specific return date for that. The Englishman may even feature tomorrow.

The Frenchman didn’t have to do too much when these sides met in the first leg. Expect him to be busier tomorrow.

Aderweireld has been solid at the back and should continue on the right-hand side of the back three.

The Colombian was a bit off-radar in the middle of a back three against Arsenal. He needs to be better than that against Dortmund.

The Belgian had a memorable outing against Dortmund in the first leg, where he scored and assisted a goal each playing the left wing-back role. A sure starter.

Kieran Trippier hasn’t been at his best, especially on the evidence of the last two league games. Hence, Aurier must get a chance ahead of him.

The Frenchman has been a consistent performer in the midfield and is in line to start there tomorrow.

With Dier and Winks doubtful for this game, we could see Wanyama starting in central midfield. The Kenyan star was below-par against Arsenal and must raise his game.

The Welshman would be a more defensive-minded left wing-back option when compared to Danny Rose. And that would be the order of the day against an expectedly attack-minded Dortmund team.

The Dane would be aiming to play in between the lines and create problems to the on the counter.

Scored the all-important equaliser against the Gunners and is a certain starter tomorrow.

The South Korean star has been slightly off form in the past three league games. However, he was the thorn in the Dortmund defence in the first leg, hence, he should be starting up front alongside Kane. 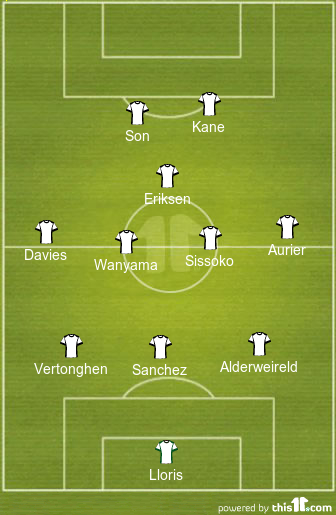