Predicted Tottenham line-up to face Chelsea in the EFL Cup

Tottenham Hotspur will be aiming to make their narrow lead count when they face Chelsea in the second leg of the EFL Cup semi-final at Stamford Bridge. Mauricio Pochettino’s men made sure that they didn’t concede an away goal, and also scored a goal at home to come into this game with more than a chance.

For Chelsea, they need to clear the one-goal deficit first and then look to take the game to their London rivals. It will be a tough one for Spurs, with injuries mounting and games coming thick and fast.

Talisman Harry Kane is injured and will come back by March. Moussa Sissoko’s injury will keep him out for this month. He is expected to be back by early February. Dele Alli’s hamstring injury against Fulham doesn’t look good and he is a major doubt for this game.

Lucas Moura was out for the game on Sunday but is expected to come back. Heung Min-Son is out representing his nation at the Asian Cup.

He started the first leg as the manager keeps him in the team for the cup games. The Argentine is expected to start on Thursday as well.

The Belgian is comfortable in possession and looks secure on the right-hand side of the back-three. The three-back system was tried on Sunday and it looked good.

He is at the middle of the back-three, sweeping all the dangers and fronting up with the central striker of the opposition.

Having played as a left-back in his time before, Vertonghen is comfortable playing as a wide centre-back on the left.

The Englishman is expected to start this important game as a wing-back with a lot of freedom to move forward.

Winks was the hero against Fulham and one of the improved players in the team. He starts in central midfield.

The Englishman is back to full fitness and is expected to partner Winks in central midfield. It’s a relief for Spurs that Dier is back in the first-team picture.

Danny Rose started on Sunday, hence, we may see a rotation here with Davies getting the nod on Thursday.

The Dane would be better suited to playing this role, finding pockets of space between the lines and terrorising the Chelsea defence.

As suggested by Pochettino, we could see Moura starting up front on Thursday. This would be better for Fernando Llorente, who is much better when playing with a support striker alongside him.

Read More: After the departure of this £11m star, Tottenham would be best served by turning their attention to this 28-year-old RB Leipzig powerhouse

The Spaniard had a forgettable outing against Fulham and a solo striker role didn’t suit him. With Moura expected to start alongside, we may see a better version of the player. 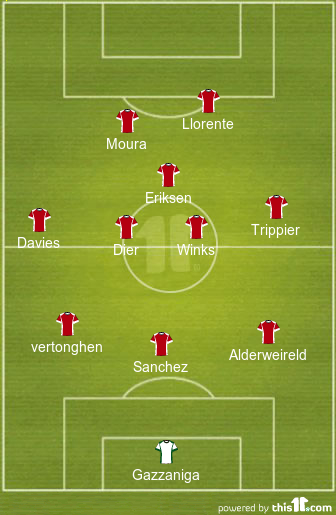