Sheffield Wednesday would be looking to come back to winning ways when they face Norwich City at the Hillsborough stadium this weekend. Jos Luhukay’s men lost at Birmingham City last week after losing to QPR in the midweek.

They face a Norwich team who are in good form at the moment, finding themselves fourth in the table and having won their previous four games in a row. Hence, it won’t be easy for the Owls, even if the game is at home.

Marco Matias and Sam Winnall are close to returning to first-team action but the weekend game may come too soon. Daniel Pudil has recovered and played for the U23s, hence, he is in contention. Kieran Lee, Gary Hooper and Fernando Forestieri are out for long-term.

A solid presence in between the sticks for the Owls this season, Dawson’s place is not under the microscope.

The captain was restored in the lineup and looked uncomfortable. He should improve to keep out a strong Norwich attack.

The Englishman has been in decent form ever since he started playing games this season. He struggled last week as well and must seek to improve.

Pudil’s experience is required at the back for a better display. He is back from injury and expected to face Norwich.

Playing at right wing-back, Palmer can influence the game in a much better way as he will have the freedom to go forward at every given opportunity.

A consistent performer for the Owls this season. His incisive passing is always a threat to any opposition defence.

Compared to Josh Onomah, Pelupessy had a slightly better game against Birmingham. Hence, the Dutchman could be selected to partner Bannan in the midfield.

He provided the assist for the only goal last week and looked comfortable on the left-hand side of the defence. He can be more impactful if played as a left wing-back.

The 25-year-old had a quiet game last time around. Luhukay would be hoping for a bit of consistency from him in the top end of the pitch.

The experienced Fletcher looked good and made some threatening runs against Birmingham. He should start up front against Norwich as well.

Read More: Why Wolves avoiding this 25-year-old Sheffield Wednesday star would be better for all parties involved

His physicality could be a key factor this weekend. 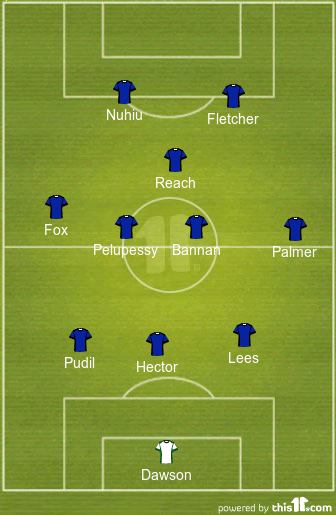