Sheffield Wednesday would be aiming to end their six-game winless run when they face fellow strugglers Bolton at the Hillsborough stadium on Tuesday. Jos Luhukay’s men let a lead slip at home to Derby County at the weekend. They should be doing better than that in their next game or they would slip further down the table.

The Owls are up against a Bolton side who haven’t won a game in eight, epitomising the importance of this fixture in the bottom half of the Championship.

Almen Abdi is back in training for Wednesday, while Kieran Lee, Sam Winnall and Gary Hooper are long-term absentees.

The youngster has been one of the better players in the team. He has been let down by a leaky defence.

The Skipper has performed well whenever he has been deployed in a back three. Luhukay should go back to that system for this game.

Struggled in a back-four against Derby. He also seems to perform better in a back-three.

The experience of Pudil could come in handy in a vital game for the Owls. Their defence needs someone of that pedigree.

The youngster produced an energetic display against the Rams. Him playing slightly forward as a wing-back would help a lot.

Morgan Fox really struggled in the last game and it is hard to see him in action on Tuesday. Expect Penney to take his place.

One of the key players for the Owls and remains a key passer of the ball in the midfield. Luhukay would be seeking consistency from him.

He needs to do a bit more to protect the back-line if Wednesday are to end their winless run.

Probably the most threatening prospect for the opposition defence to deal with. His goals and assists are vital to the team.

Linked up the attacks in the last game without much joy. Maybe playing alongside a strike partner would help him.

The veteran was rested after featuring in both international games for Scotland. He should start this game alongside Joao. 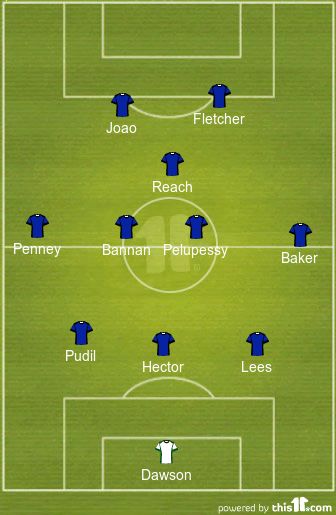