Sheffield United will take on Sheffield Wednesday in what promises to be a mouthwatering Steel City derby on Friday at the Bramall Lane.

A win for Sheffield United could take them to 50 derby wins but a victory for Sheffield Wednesday would see them level up the all-time head-to-head record.

A win for Chris Wilder’s side would see them extend their unbeaten run in the Steel City derby to three matches as the Blades look to bounce back from the disappointing defeat against Nottingham Forest.

Chris Wilder have been handed a boost as Mark Duffy is expected to return from injury in time for the game. Chris Basham will also be available for selection after serving his one-game suspension.

Henderson has established himself as Blades’ no.1 in goal since joining from Manchester United on loan in summer.

Basham has served his one-game suspension and will walk straight into the Blades’ XI.

United’s lynchpin in defence, Egan will look to keep the Wednesday attackers at bay on Friday.

Jake O’Connell will complete the three-man United backline. A ball-playing defender, he will relish the challenge of facing Steven Fletcher and co.

Freeman is a versatile player who will offer width down the right flank.

Stevens has been a permanent fixture in the United team. He is a certain starter in the Steel City derby.

Norwood exudes calmness in midfield. He is a fantastic passer of the ball and knows when to change the pace of the game.

Fleck could partner Norwood in central midfield. A tigerish midfielder, he will look to break Wednesday’s play and offer creativity to his team.

Duffy is ideal for the no.10 role as he is fantastic in linking play between the midfield and attack.

Sharp has been United’s chief source of goals this season. He is an undoubted starter for this feisty fixture.

Clarke is good at holding up play and bring his teammates into the game. He would look to deliver the goods on Friday. 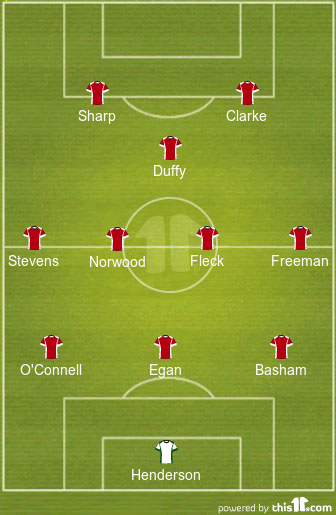