Predicted Sheffield United line-up to face Leeds in the Championship

The Blades have slipped to fifth place in recent weeks due to a string of poor results. However, they will be confident of doing the job against Leeds following a morale-boosting 3-2 victory at Brentford in midweek.

Leeds United, on the other hand, have lost the top spot but come into Saturday’s contest on the back of a narrow 1-0 win against Reading.

Henderson has been a star in United colours since joining on loan from Manchester United. He is a definite starter against Leeds.

Basham has been a regular fixture in Wilder’s team and should be an easy pick for the weekend game.

Egan has been United’s leader at the back. He will have to be at the top of his game to keep the Leeds attackers at bay.

O’Connell is a strong defender who is an asset to have in the team on both ends of the pitch.

A fantastic crosser of the ball, Stevens will look to create problems for Leeds down the left.

Freeman is an attacking wing-back who will look to give Leeds a tough time on Saturday.

Fleck is an aggressive customer who adds a lot of bite and energy to United’s engine room.

Scored a wonderful goal in the 3-2 win at Brentford. A classy operator of the ball, Norwood is a sure starter against the Whites.

Duffy was rested during the midweek game in order for him to stay fresh for the big clash. A creative playmaker, he will start in the No.10 role.

Sharp is United’s main marksman and he’ll be looking to give the Leeds defenders a torrid time on Saturday.

Read more: Sheffield United’s promotion hopes would get a significant boost if they sign this 20-year-old Fulham starlet in January

Washington’s pace and directness could be tricky for the Leeds defenders to handle. Wilder might give him the nod ahead of Leon Clarke and David McGoldrick. 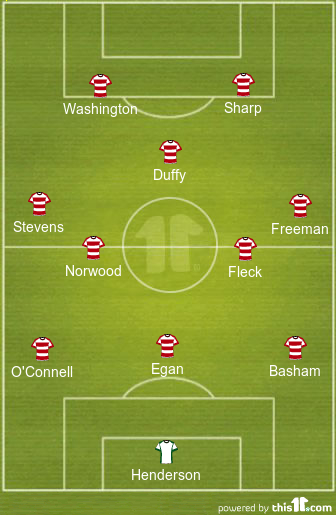