Sheffield United will be aiming to keep their decent form going when they face Aston Villa at Villa Park on Friday night. The Blades got an important 2-0 win against Bolton over the weekend to keep themselves within touching distance of the top two teams in the league.

Chris Wilder’s men are currently third in the table, but only three points behind the automatic promotion places. In fact, they have a slightly better goal difference than both Leeds United and Norwich City. Hence, United are with more than a chance to fight for a top-two finish.

For that to happen, they need to play good football and win games on a regular basis starting this Friday.

Jake Wright is back in training and could feature sooner than later. Other than that, Wilder doesn’t have a wide injury list to deal with.

He is their first-choice keeper and that should continue to be the case for every league game.

Basham has been doing well at the back for the Blades. His versatility was used by the manager in the previous game where he came on to shore up the midfield. He is a certain starter.

He plays in the middle of a three-man defence and has done a great job there. He is expected to start on Friday.

He is very comfortable in moving forward with the ball and helping the attack in the wide areas. O’Connell possesses the defensive qualities as well. He is a natural left-sided centre-back.

Baldock has been a bundle of energy down the right channel. He makes runs up the field and puts delicious crosses into the box. He tracks back when required.

His quality on the ball shines out in the midfield. Norwood is a special player who is key to how Sheffield United dominate the central areas of the pitch.

He partners Norwood in central midfield and the duo works well as a pair. He is expected to start this Friday.

He is a regular starter at left wing-back and that should be the case on Friday as well.

He always looks to create chances for the two strikers up front, keeping the opposition defence busy at all times.

He scored in the previous game and looked a threat alongside Billy Sharp. The striker is expected to start against Villa.

Read More: Sheffield United splashing £9m on this Aston Villa star would be nothing but a waste and Wilder must avoid it

The 33-year-old continues to score goals for the Blades, having already done that 19 times this season. He would be a real menace to the Villa defence on Friday. 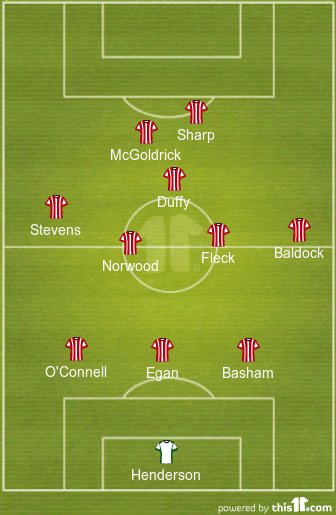