Arsenal will visit Anfield to face Liverpool on Saturday as they look to extend their 100 per cent domestic record with a third win of the Premier League season.

Unai Emery’s side have enjoyed a perfect start to their season thanks to wins over Newcastle United and Burnley but the trip to Liverpool will comfortably represent their first big test of the new campaign.

Liverpool, who are joint table-toppers with Arsenal, head into Saturday’s contest off the back of a narrow 2-1 victory over Southampton.

Granit Xhaka could return after missing the Burnley win due to ‘bruising to his lower back and leg’ while Mesut Ozil’s status remains unclear due to personal issues and illness. Rob Holding is back training with the first team and played for the Under-23s last week but will not be rushed back into Premier League action.

Meanwhile, Hector Bellerin, Konstantinos Mavropanos and Kieran Tierney are all long-term injury concerns for the Gunners.

Leno is Arsenal’s undisputed no.1 and he has to be at the top of his game to keep a clean sheet on Saturday.

With Hector Bellerin our injured, the young Maitland-Niles is the natural starter down the right-hand side for the Gunners.

Sokratis has started the season positively and is well-versed in a back three system. He is certain to start against Liverpool.

One of the best ball-playing defenders of the division, Luiz will have to be at his best to keep Liverpool’s attackers at bay.

Monreal lacks pace and agility but he makes up with his good understanding of the game. He’ll complete Arsenal’s back three.

Kolasinac is best suited as a left wing-back due to his lapses of concentration. The Bosnian will provide a lot of width down the left flank on Saturday.

Guendouzi has impressed in the first two games of the season and deserves to keep his place in the starting XI.

Despite the young Joe Willock doing so well from the start of the pre-season through the first two games, the Gunners would need a leader in the middle of the park and that could see the return of Granit Xhaka at the weekend.

Ceballos had a storming game in midfield during Arsenal’s 2-1 win over Burnley last weekend, ending up with two assists to his name. He is a definite starter at Liverpool.

The Frenchman scored in the 2-1 victory over Burnley and he will have to be at his best to help his team leave Anfield with a positive result.

The one Arsenal player on the pitch who can change the game in a blink of an eye – expect Aubameyang to start alongside Lacazette up front. 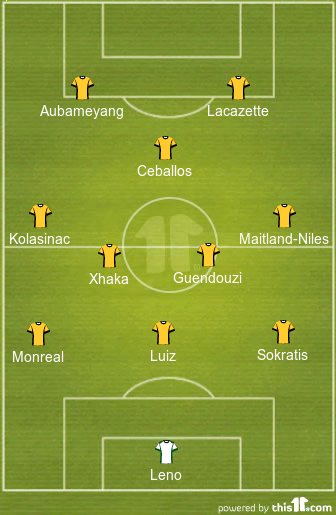