League leaders Leeds United are on their travels this weekend to face Nottingham Forest in the Championship. Marcelo Bielsa’s men got back to winning ways after beating strugglers Ipswich Town 2-0 on Wednesday at Elland Road.

As a result of that performance, the Peacocks are now on top of the standings, looking good for promotion. However, there are a lot of games left to play, starting with Nottingham away, which won’t be easy by any stretch of the imagination.

Gaetano Berardi lasted only 27 minutes against the Tractor Boys, meaning he could be out for the weekend. Barry Douglas might be back next week, while Isaiah Brown is ever so close to returning to first-team action after a long injury layoff.

The youngster is slowly but surely settling in well this season after a slightly stuttering start.

After missing the game on Wednesday due to a ban imposed on him, Jansson should be back in the line-up this Saturday.

Phillips’ assurance on the ball great. He can drop in between the two centre-backs and also step up in the midfield when required. An important cog in the Bielsa wheel.

The captain looks more confident and comfortable when playing in a back-three. The manager should concur with that and deploy the same system.

Ayling is more of an attacking full-back, hence, playing as a right wing-back would suit him better as he can concentrate on providing the width to his team’s attacks.

The Pole has regained his controlled form after another good performance against Ipswich. The change in formation has helped him as well. He is back playing a key role for the team.

Alioski looked better at left wing-back. However, he needs to improve his crossing and the final ball.

Saiz has struggled to really impact games in the past few weeks. But he still remains a vital component of the team. Expect him to get better soon.

Came back from an injury against Ipswich and straightaway looked a part. Leeds fans would be delighted to see the winger back in action.

Scored a goal on Wednesday to mark his return after the injury layoff. He is a genuine threat to the defenders.

Read More: Why Bielsa must use his Pochettino connection to sign this 20-year-old Tottenham prodigy on loan

Still not performing upto the expectation. However, the manager is keeping faith and giving him the opportunities. 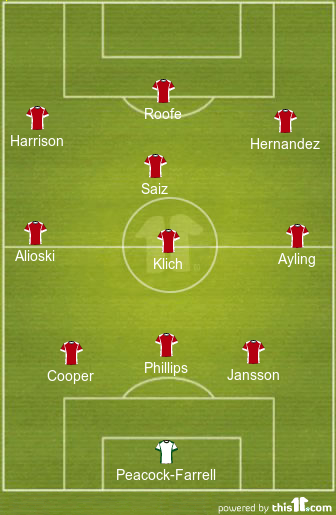