Derby County play hosts to Queens Park Rangers on Saturday as Phillip Cocu looks to bounce back to winning ways in the Championship.

The Rams suffered a 3-0 defeat to Fulham at Craven Cottage on Tuesday. Cocu’s side have struggled to find consistency this season and currently sit in the bottom half of the table.

A win against an out of sorts QPR on Saturday is a must for Derby as they look to get some momentum.

Derby County pair Graeme Shinnie and Mason Bennett could be out until the New Year. (h/t The Derby Telegraph)

Tom Huddlestone has been out for a long time after picking up an injury against Barnsley.

Kelle Roos was arguably at fault for all three goals against Fulham. His performances haven’t been great this season, yet Cocu could stick with the Dutchman.

Bogle is an attacking right-back who provides a lot of energy and intensity down the right flank. He’ll keep his place in the team.

With Keogh’s sacking, Davies is the experienced head in the Derby backline. He’ll look to keep the QPR forwards at bay on Saturday.

With Derby short of options in central defence, Forsyth is expected to deputise alongside Davies at the back.

Lowe has been a regular fixture under the tutelage of Cocu and should keep his place at left-back.

Evans brings stability and calmness to the Rams’ engine room. There’s no reason why he won’t start against QPR.

A defensive midfielder by trade, Bielik will be tasked with stopping QPR’s play in the final third.

Waghorn has netted 7 goals this season and will aim to get on the score sheet against a lowly QPR side.

Holmes needs to add more cutting edge to his game if he is to thrive in the No.10 role.

Lawrence very much had an off-day following his early missed chance against Fulham. However, the Welshman will look to put in a better display against QPR.

Jack Marriott hasn’t fired this season but with Chris Martin blowing hot and cold, he could get a chance to stake his claim at the weekend. 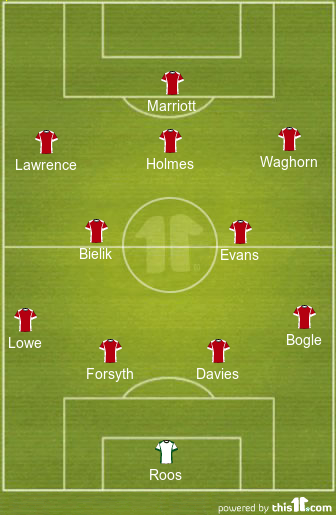