Manchester United welcome Newcastle United to Old Trafford on Boxing Day hoping to bounce back to winning ways in the Premier League.

The Red Devils’ six-game unbeaten run in the Premier League came to an end on Sunday when they were defeated by Watford. The defeat to the Hornets leaves them at 8th place with 25 points, their lowest points tally at this stage of the top-flight campaign since 1989-90.

However, Ole Gunnar Solskjaer’s side need to pick themselves up quickly and get three points against Newcastle, who defeated United when the two teams met at St. James’ Park back in October.

Paul Pogba returned to action as a second-half substitute against Watford. Eric Bailly, Timothy Fosu-Mensah and Marcos Rojo are expected to miss out for the hosts.

De Gea had an afternoon to forget at Watford as he made a gaffe that set up a shock win for the hosts on Sunday. The Spaniard needs to pick himself up and prove his doubters wrong on Thursday.

Wan-Bissaka has been excellent for Manchester United but he conceded a penalty by tripping Ismaila Sarr at the weekend. Like De Gea, he’ll be eager to redeem himself.

The Swede has blown hot and cold this season. He’d have to be at the top of his game to keep the Newcastle attackers at bay.

One of the first names on the team sheet, Maguire needs to be better than what he’s produced at United so far. He’ll partner Lindelof at the back.

Shaw hasn’t hit top form since returning from injury. He needs a run of games to get back his mojo.

McTominay has grown in stature this season, showing tenacity, bite and a lot of character in the middle of the park. He’ll retain his place in the team.

Fred has been solid of late in the midfield and his presence will be vital to neutralize Jonjo Shelvey on Thursday.

James didn’t have the best of games against Watford and was substituted in the second half. The Welshman will be eager to produce a solid performance on Boxing Day.

Pogba’s return was a breath of fresh air for the Red Devils, injecting urgency into their play. The Frenchman will slot in the No.10 role and look to weave his magic.

Rashford is in red-hot form, but after a subdued performance against the Hornets, the 22-year-old has to produce the goods against a disciplined Newcastle side.

Martial has led United’s attack well this season but he has to be at his lethal best to trouble the Newcastle defenders on Thursday. He’s a certainty to start. 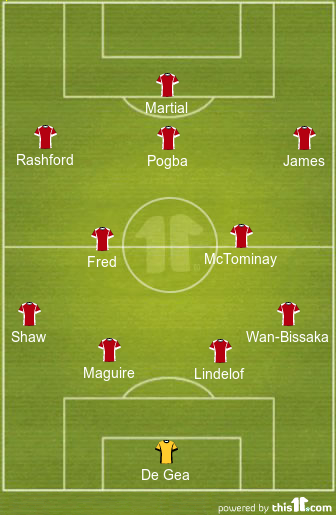