We are into the business end of the season, where things are getting heated up, be it in the league or in knockout competitions. Amidst all that, Liverpool are hosting Chelsea in a massive Premier League game that could tilt the title race upside down.

The Reds are currently top of the table, having played a game more. They could possibly kick off this Sunday in second place as Manchester City are entertaining Crystal Palace two hours before.

Hence, in the context of this wild title marathon race, Jurgen Klopp’s men have to beat Chelsea in order to exert extreme pressure on the Cityzens.

On the other hand, Maurizio Sarri’s men have found some form lately. They have a pretty decent record at Anfield of late and would be looking to exercise that this weekend.

So, without ado, lets take a look at the combined line-up featuring players from both teams who are available to start on Sunday:

With most clean sheets in the league this season so far, Alisson leads the way in goal.

Trent Alexander-Arnold is good going forward but can be susceptible at the back. Hence, a more sturdier option in Azpilicueta is chosen.

The German has had a decent season at the back and is included in this combined XI.

He is one of the best centre-backs in the world and could walk into most teams in Europe at the moment.

The Scotsman is arguably one of the best left-backs in the league. Hence, he gets the nod ahead of Chelsea left-backs.

Despite playing in an unfamiliar position, Kante contributes positively to what Chelsea do in the midfield. He is a World Cup winner and has the ability to walk into most midfields in Europe.

The Brazilian has been consistently good in defensive midfield for Liverpool since the turn of the year. He gets a place in the midfield alongside Kante.

With Eden Hazard down the other side, Mane can switch ends and play on the right wing. The Liverpool man is effective on both wings.

The Brazilian has that ability to play slightly deeper and link up the play between the midfield and attack.

He is one of the best players in the league. There are not many in Europe who can take his left-wing position.

Salah has led the line more than a few times this season and does the same in this combined XI. He broke his drought against Southampton and would be aiming to build on that now. 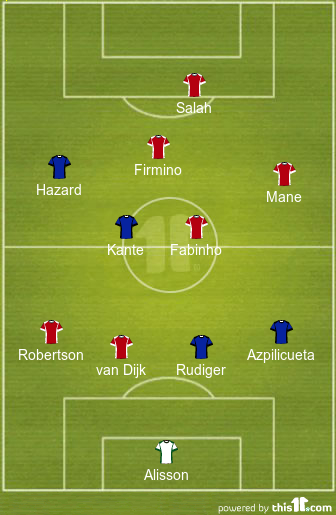