Manchester City remained at the top and seem to be unstoppable after picking up another resounding win against West Ham United. Liverpool ensured they put the pressure on them by beating Watford, as the Reds aim to chase down the defending champions.

Arsenal were also able to come away with a win against the in-form Bournemouth. Tottenham Hotspur came away with a strong win against Chelsea, handing Maurizio Sarri his first defeat of the season. Manchester United were once again utterly poor as they failed to score a goal against Crystal Palace and were made to share the spoils.

There were some impressive results at the other end of the table as well, with Huddersfield Town claiming a surprise victory against Wolverhampton Wanderers. Fulham came back twice against Southampton to pick up their first win under new manager Claudio Ranieri.

Here we take a look at the best performers of Matchday 13.

Premier League Team of the Week

Kept another clean sheet against Watford and made a superb match-winning close range save from Roberto Pereyra’s shot. He may not have been tested too much but the Brazilian is making the difference at his end.

Scored a sublime free-kick against Watford and defended fruitfully on the night. The English youngster has been in brilliant form over the last week. He takes the right-back spot.

Chelsea barely created much against Tottenham Hotspur and it was purely due to the Belgian’s commanding presence that made the Blues look so lacklustre. Alderweireld easily dealt with Alvaro Morata as he led the Lilywhites to a home win.

Another confident and supreme performance from the Manchester City centre-back who barely looks fazed or has a bad moment. City are keeping clean sheets for fun at the moment and Ederson has barely been tested, thanks to Laporte’s hard work at the back.

May seem like a surprise inclusion but the left-back caused all sorts of problems marauding down the flank. He defended very well on the night and picked up an assist for one of Mooy’s goals.

Ran riot against the Saints as he created numerous opportunities going forward. The youngster also picked up a pair of assists and could be a standout performer under Claudio Ranieri’s stewardship.

Popped up with both the goals that gave Huddersfield Town their win against Wolverhampton Wanderers. The second was a superb free-kick. The Australian was very crisp and precise with his passing as well.

Has been inconsistent this season but he was on fire in this game against the Cottagers. Both his goals required good technique and ability as he calmly slotted them in. Armstrong should now maintain his form.

Just how good does this guy get? Sterling was once again in the thick of the action as he picked up 1 goal and 2 assists against West Ham United. He seems to be their most dangerous player at the moment.

Back on the scoresheet with a brilliant brace against Southampton. Mitrovic now has 7 goals for the season and could be a regular goal-scorer under Claudio Ranieri. The Serbian could have had a hat-trick in this game.

Read more: Champions League watch: Here’s how Liverpool, Man City and other PL giants can qualify for the knockouts

The South Korean scored a sublime solo goal against Chelsea as he left both Jorginho and David Luiz in their wake. Caused a raucous at the back for the Blues and was unfortunate to score just one on the night. 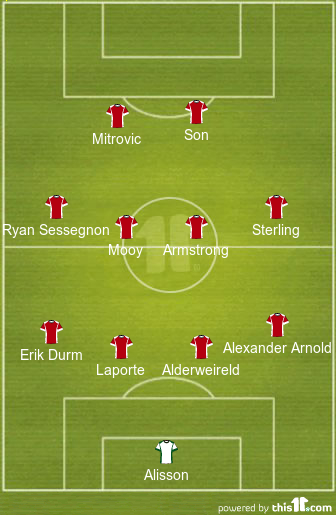