Southampton have made a dismal start to their Premier League campaign, winning just one game so far. Mark Hughes’ men are on one of the worst opening runs in their history and need to make immediate amends.

The Saints come up against Newcastle United in the Premier League this weekend, which should pose a good opportunity to pick up a win. The Magpies have been dreadful themselves and need a positive performance.

Mario Lemina took a knock but was able to carry on in the last game. He should play this one.

McCarthy has been great since taking the reins from Fraser Forster last season.

One of the better performers in what has otherwise been a torrid season for the Saints.

Vestergaard will return to the line-up to take the place of Jack Stephens.

Hoedt should partner the new signing at the back for this game.

Bertrand’s raids down the left flank could cause all sorts of problems for the Magpies. A sure starter.

The new signing is yet to find his feet in the Premier League. He will, nevertheless, start on the right-hand side.

The midfielder has been impressive with his defensive work in the middle of the park and should start this game.

The midfielder has seen a slight dip in his form and needs to be more aware in the middle of the park.

Redmond has barely looked the player he once was and has been unable to threaten in the final third.

Ings has been great since making the move to the St. Mary’s Stadium and will be aiming to get on the scoresheet against a fragile Newcastle defence.

Read more: Why Southampton beating Tottenham to the signature of this Championship star could be a crucial move

Austin too has failed to find the net this season and needs to step up his performance in this one. 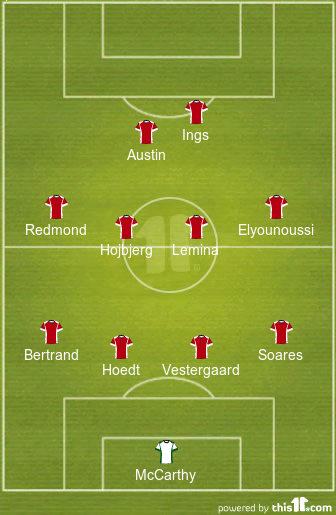