West Ham United welcome London rivals Tottenham Hotspur to the London Stadium for an enticing Premier League game on Saturday. The Hammers have regained some form after losing the first four league games.

They defeated Everton and Manchester United and got a valuable point against Chelsea. However, a defeat at Brighton just before the international break would have hurt. Hence, Manuel Pellegrini’s men would be looking to get back to winning ways. However, facing a very good Spurs team will be a tough job.

Robert Snodgrass was dropped for the Scotland squad for the Nations League game. Marko Arnautovic played through injury for Austria but he should be fit for Saturday.

Jack Wilshere should be back by the end of this month and Javier Hernandez is back in the reckoning. Andy Carroll could be back in the squad but Arthur Masuaku has a minor ankle injury.

The new summer signing has been fantastic so far since arriving at the club. His saves have been important, especially against Everton and Chelsea.

The veteran Argentine is doing well for his former manager. He is showing no signs of tiredness in games, which a testament to his fitness.

Diop was a bit shaky at the start but has been good since. His partnership with Fabian Balbuena is flourishing.

Another player who was brought in this season and has done well after a slow start.

With Masuaku subject to a late fitness test, Cresswell might get the nod to start on Saturday.

The youngster has done well in the defensive midfield role. He is comfortable in possession and reads the game well.

The captain will be raring to go against the derby rivals. He was very good against United, and West Ham would be hoping for more of the same against Tottenham too.

Wilshere is out for one more week. Hence, Obiang is expected to continue playing in the midfield.

The Brazilian has shown flashes of his brilliance, however, he is yet to constantly make an impact. A good performance against Tottenham would be a good start.

The Austrian played through pain for his country but is expected to be fit for this game. He has been brilliant playing as a striker.

Read More: Why West Ham must sign this 24-year-old midfield powerhouse in January – could be Noble’s successor

The Ukrainian is certain to start at his favoured right-wing position, from where he can cut inside and unleash a shot with his left foot. 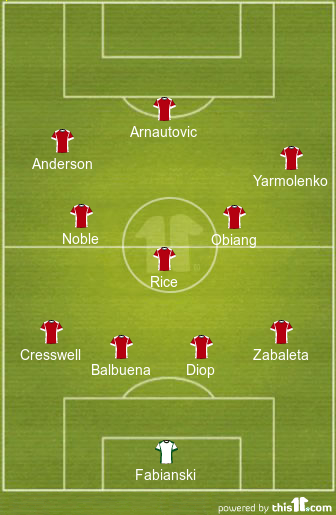