Rangers faces a trip to St Mirren on Saturday as Steven Gerrard looks to notch a second consecutive Scottish Premiership away win.

The Gers dropped points in midweek as they drew 1-1 with Kilmarnock. However, Steven Gerrard’s boys will have a solid chance to get back to winning ways as they face a St Mirren side which is on a run of six defeats on the trot.

But the 0-0 draw against Celtic on boss Oran Kearney’s debut could galvanise the Buddies to perform to a similarly high level at home against Rangers.

Borna Barisic could miss the weekend clash and Graham Dorrans has suffered another injury setback. Meanwhile, Jamie Murphy is ruled out for the season.

McGregor could be called back into the starting XI after missing out against Kilmarnock on Wednesday.

Tavernier has improved leaps and bounds under Gerrard and the extra responsibility of leading the side has brought the best out of him this season.

Goldson is one of the first names in the team-sheet. He should continue in central defence for the Gers.

Partnering Goldson at the heart of Rangers’ defence would be Worrall, who is slowly adapting to the demands of the Scottish Premiership.

With Barisic out injured, Flanagan could get another chance to start at left-back. Truth to be told, Flanagan has blown hold and cold on the left.

For the holding role, there is no better player in the Rangers squad than Ryan Jack. Jack can protect the backline well and provide the players with the license to express themselves freely.

Arfield is a versatile player who brings a lot of experience as well as energy to the side.

Coulibaly adds a lot of robustness to the midfield. He can drive the team forward and pop up with important goals for his team as well.

Perhaps the game against St Mirren could be the perfect time to unleash Middleton. Middleton has raw pace to burn and could give endless problems to the struggling St Mirren side.

Kent has already made 20 appearances across all competitions this term and been directly involved in five goals. A certain starter at St Mirren on Saturday.

Read more: Why signing this 32-yr-old veteran free agent would be a massive coup for Gerrard’s Rangers

Morelos has been in fine form this season, scoring 12 goals in 21 outings in all competitions. He should lead the Rangers’ attack at the weekend. 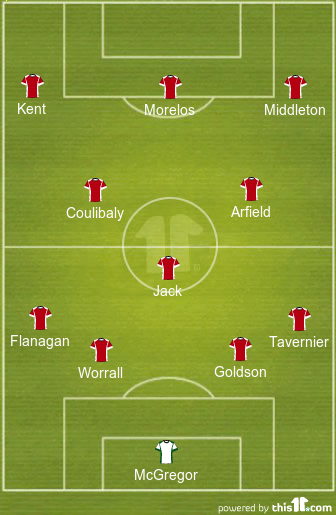