Defending champions and league leaders Manchester City travel to north London to play a tough game against Tottenham Hotspur at Wembley. Pep Guardiola’s men brushed aside Burnley in their previous league encounter, cementing their place at the top of the standings.

However, going up against a talented Spurs team is never an easy task. Hence, the Cityzens have to be at their very best if they are come out of London with three points in their bag.

Ilkay Gundogan, Danilo and Claudio Bravo are all ruled out for the next few weeks. The good news for them is that Kevin de Bruyne played the European game at Shakhtar and looks fit to go again.

The Brazilian hasn’t really been tested in the league this season, such is the dominance of the team.

Walker didn’t play the previous two weeks due to a slight niggle. He is expected to back for this one.

In a tough away game against a title rival, the presence of captain Kompany could be a necessity for the team.

The Frenchman has been a colossus at the back, and his passing from the back is just sumptuous.

His runs down the left-hand side have been a problem for the defenders but the Frenchman needs to work a bit on the final ball. He’s been defensively sound so far.

Fernandinho is like the orchestrator of the team, shielding the back-line, winning midfield duels and preventing the counter-attacks.

The Spaniard ran the show against Burnley and Shakhtar, which is a frightening prospect for Tottenham as they come up against him.

Played 70 minutes on Tuesday night to regain match fitness and the Belgian looks ready to be back in the first-team.

Sane’s pace and direct running with the ball should keep the Spurs right-back busy. City can dominate the game using this.

The Argentine was on the bench in Ukraine but his scoring form against Tottenham has been terrific. He should start ahead Gabriel Jesus.

Read More: Why Man City completing a £40m deal for this rising PL star could be a shrewd move by Pep

Sterling’s form is key to how City play in the final third. The Englishman can score goals, create them and also make unselfish movements to fabricate space for others. 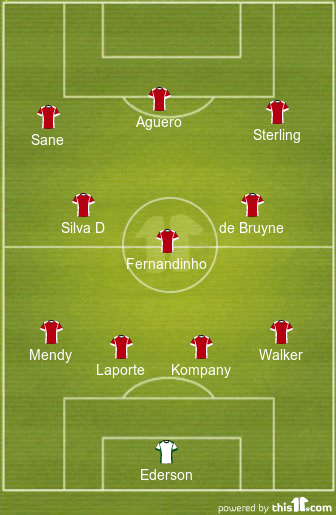