A struggling Fulham visit Wales to face fellow strugglers Cardiff City in a game where both teams need a win. While the Cottagers are 17th in the table after winning only one game out of the eight thus far, the Bluebirds are winless this season.

Therefore, it is understood that these two newly-promoted teams would be looking to get the points when they face favourable opponents. For Slavisa Jokanovic and his men, they have to stop the rot in the defence. The London club are conceding goals for fun, which is not a good sign.

Captain Tom Cairney still has some problem regarding his ankle, hence, he may not be risked for this game. Joe Bryan has a hamstring strain, which could keep him out of action until the end of October. Timothy Fosu-Mensah dislocated his shoulder last month and will be out for more than a few weeks. Neeskens Kebano is back in training but Saturday may come too soon for him.

The Englishman has been the best man between the sticks despite his club spending money on buying new shot-stoppers in the summer.

Christie was very uncomfortable playing as a right wing-back against Arsenal. He would probably be more assured at right-back.

The new summer signing hasn’t settled in yet, partly because of the team’s unsettled back-line. He can use this game to stake his claim for the future.

Out of a mediocre bunch a fortnight ago against Arsenal, Le Marchand was one of the better players. Hence, he must stay in the team.

The youngster has shown signs of brilliance but fades away during the games. He is still in the learning process though, and the team aren’t playing well to support him either.

If Fulham are to perform better, marquee signing Seri needs to step up in the midfield and show his worth in the Premier League.

Andre-Frank Zambo Anguissa hasn’t yet settled down in England yet. Hence, McDonald should start in defensive midfield ahead of the Cameroonian.

With Cairney out for this game, we could see Johansen starting in central midfield.

The Atletico Madrid player, who is on loan at the club for the season, has done well in the wide areas. The final product still needs a little polishing.

The Serb has been in great form this season, scoring goals and being a nuisance to the centre-backs. Expect him to continue chipping in with goals.

Read More: Why Fulham should take the step to shore up their midfield using this out of favour Chelsea starlet

The German has shown moments of brilliance at times, however, the consistency is lacking. Jokanovic would want more from him on a regular basis. 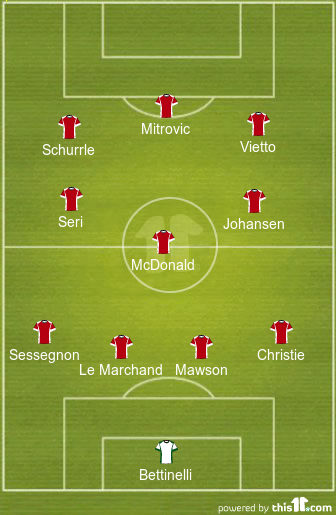