Predicted Fulham line-up to face Bournemouth in the Premier League

A struggling Fulham welcome an in-form Bournemouth to Craven Cottage for this weekend’s Premier League clash. Slavisa Jokanovic’s men find themselves in the relegation zone nine games into the season, something which they wouldn’t have expected after spending a fortune over the summer.

The worry was compounded when the London-based club lost at fellow strugglers Cardiff City last Saturday and conceded four goals. They have already shipped 21 goals in eight games prior to facing the Welsh club. Now, the Championship playoff winners find themselves in a tough position. The next game isn’t easy either, because Bournemouth have been a free-scoring side this season and are sixth in the table.

A stiff test for Jokanovic and his management skills to negotiate this fixture and the ones after this.

Captain Tom Cairney is in contention for a return, while Timothy Fosu-Mensah is hoping to be fit for this game. Joe Bryan is definitely out but Neeskens Kebano is back in training and is an option for the squad on Saturday.

Fair to say that the Englishman has been in good form between the sticks despite conceding goals for fun. His defenders haven’t protected him at all.

Calum Chambers struggled at right-back against Cardiff and was eventually subbed off due to an injury. We may see Christie return to that position.

The summer signing has been in and out of the side. The manager should give him a run of games in order to make him regain proper match fitness.

Other centre-backs haven’t covered themselves in glory but Odoi has looked good out of an average bunch.

Scored his first Premier League goal last week, however, Fulham would need him at left-back rather than at left-wing.

The Cameroonian hasn’t yet settled into life in England. On the other hand, Kevin McDonald isn’t playing well too. It would be better off playing the former against Bournemouth.

If the Cottagers are to stay safe this season, they need Seri to perform on a consistent basis.

The Norwegian was the pick of the lot in Wales last week. He should start since Cairney is yet to come back in the fray.

Scored a wondrous goal against Cardiff but his final ball has to improve. The German needs to step up for the betterment of the team.

The Serb has led the line well this season, however, the dearth of support makes him a frustrated figure at times.

It’d be better if Fulham revert to the same front three who have begun the most number of games together this season. That means Vietto starting on the right. 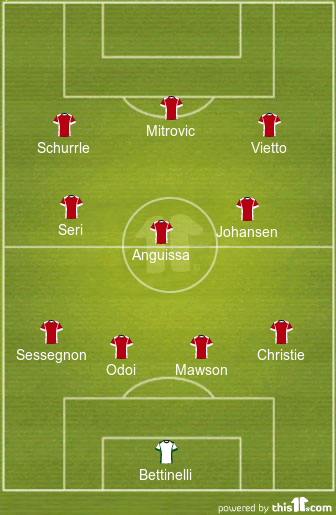