Predicted Chelsea line-up to face Manchester United in the PL

Joint league leaders Chelsea resume their league campaign with an enticing home game against rivals Manchester United. Maurizio Sarri’s men are second in the table, equal on points with leaders Manchester City but behind on goal difference.

The Blues have made a great start to the season under the new management. Hence, being the home team, the onus would be on them to take the game to a patchy United team. A win would be a great way to get things back on track for Jose Mourinho’s men, but an away game against Chelsea is never easy.

Antonio Rudiger is injured and is a doubt for Saturday. The German will be put under the scanner before the game. Ethan Ampadu is out for a month.

The Spaniard is slowly but surely justifying his world-record price tag with assured performances in goal.

The ever-present and ever-reliable Azpilicueta is certain to take his right-back slot as per usual.

The Brazilian has been in great form this season under Sarri. His performances have surprised a few as well.

Another player who is ever-present and ever-reliable for the team. Alonso at left-back is a fixed position, unless there is an injury.

The governor-general of Sarri’s team, Jorginho is expected to hold the midfield together with his tackling and impeccable passing.

The Frenchman has done well to adapt to his new position at Chelsea. He is, in fact, harnessing more impact on the games.

Barkley played both international games for England and looked in good form. He may just get a nod ahead of Mateo Kovacic for this game.

The talisman of the team in terms of producing goals and being a vital cog in the forward line. He needs to play at his best for Chelsea to challenge for the title this season.

Alvaro Morata is slowly coming back to form with goals in the last two games. However, he still looks far off from his best. Hence, Giroud should continue to lead the line.

The Brazilian would be looking to support Hazard, scoring and creating goals for the team. 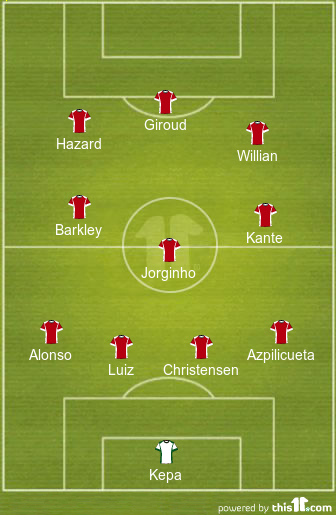