Predicted Celtic line-up to face Hibernian in the Scottish Premiership

In one of the important games of this weekend, as third-placed Celtic welcome second-placed Hibernian for a tight Scottish Premiership game. Brendan Rodgers’ men thrashed St. Johnstone in their previous league game and looked in good form. However, Hibernian are in good nick as well.

Hence, the outcome of this game might be pivotal in determining who can go all the way in the title race. Rodgers and his men would be looking to beat their opponents and leapfrog them in the table.

Kristoffer Ajer is still out, probably until the end of October. Scott Brown is back in training and might be considered for this game. Marvin Compper is back in the mix too after missing since mid-July.

He didn’t have to do much in the previous game. But the 35-year-old would be expecting a tougher outing against Hibernian.

The right-back should be in the line-up for this game. He would be tested on Saturday.

The Belgian has looked good after a tricky start due to several on and off-field reasons. He could yet be a key member of the team.

In the absence of Ajer, Benkovic has been solid alongside Boyata, forming a good partnership.

The youngster is a vital part of the squad at left-back and is a sure starter for this game.

With Brown expected to be out for this game, Rogic may continue to keep his place in central midfield.

The Frenchman has been in decent form this season. He is an important member of the team.

The Scot scored a goal against St. Johnstone and looked very good. His performance is a major factor in the team’s output.

The youngster has been slightly in and out of form this season. Netting a goal a fortnight ago would have given him so much confidence.

The Celtic star signed a new contract recently and celebrated that by scoring four goals against St. Johnstone. He would be expected to be a big threat to the Hibernian defence on Saturday.

Read More: Why Celtic signing this 29-year-old physical defender could turn them into title contenders again

The 28-year-old withdrew from the Scotland squad to be extra fit for Celtic’s tough run of games in the league and Europe. He should be fresh and raring to go now. 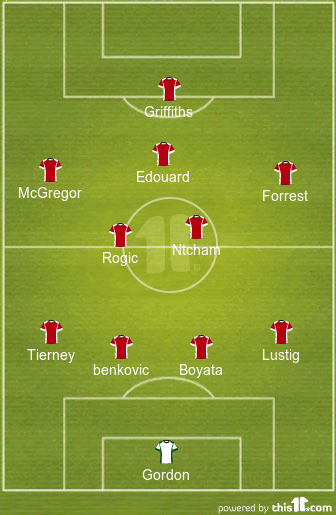