Arsenal will look to stretch their winning run in all competitions to 12 when they face Crystal Palace at Selhurst Park this Sunday in the Premier League. Unai Emery’s men haven’t dropped points in any competition since losing to Chelsea on the 18th of August.

They play a Crystal Palace side who haven’t scored a goal at home this season, a sign of crisis for the Eagles. The Gunners would be aiming to heap more misery of Roy Hodgson’s men and come out of this London derby with three more points.

Petr Cech is fit and it is up to the manager to decide whether to stick with Bernd Leno or go back to Cech. Nacho Monreal and Sead Kolasinac would be assessed ahead of the game. Laurent Koscielny’s return is on track for November.

Since taking over Cech’s position, there is more security at the back just because he is good with the ball at his feet.

The Spaniard was given a game off on Thursday, hence, he should back for this match.

One of the best defenders for Arsenal this season despite being a bit suspect at times. The good thing is he is improving game by game under Emery.

Came back from injury and played a good game against Sporting. Expect him to resume his partnership with Mustafi.

With Monreal and Kolasinac still doubtful, Lichtsteiner should start at left-back.

The Uruguayan has been terrific for the Gunners in central midfield, covering the ground so quickly to snuff out any danger. He is good on the ball as well.

The Swiss international has looked good and comfortable alongside Torreira. However, he needs to refine his game to do simpler things in the tight areas of the pitch.

The German was a class apart against Leicester City. Arsenal fans would be hoping for more of the same in the coming games.

The Nigerian has been fantastic this season. He earned his place in the regular starting eleven on Monday and should continue to feature.

Aubameyang should start this game. He came off the bench to score a brace against the Foxes and is in terrific form.

Read More: North London is red – Here are 2 reasons why Arsenal will finish above Tottenham this season

The Frenchman is the main man for the Gunners and is leading the line well, scoring goals in regularity. 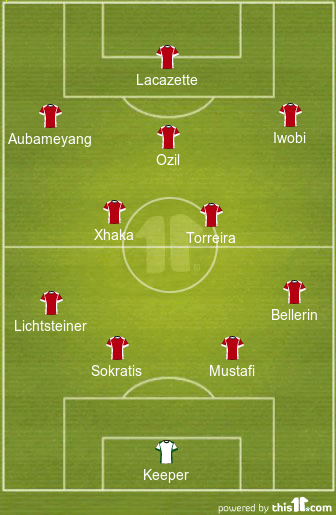