Predicted Hull City line-up to face Preston in the Championship

Hull City welcome fellow strugglers Preston North End to the KCOM Stadium on Saturday for a Championship game. Nigel Adkins’ men are in serious need of a win as they are at the bottom of the table and are staring at relegation.

The Tigers haven’t won a game in the last five fixtures, which shows their struggle in the second division of English football. The manager is rightly under pressure to deliver the results.

Evandro is back in training and might be included in the squad for this game. Jodry de Wijs is still out for this month, whereas Fraizer Campbell and James Weir are close to full fitness.

Marshall’s saves are so vital to the team. He is an important part of a struggling squad.

Burke has looked comfortable in a back-three system. Adkins should not change much in it.

The loanee from Aston Villa is looking good in a Hull shirt, playing well and leading the back-line.

Lichaj is another player who has been solid after the change in shape.

The Tigers would be hoping for Kane to influence the game in the final third. He can be a great prospect in the wing-back position.

Batty was a star against Sheffield United a fortnight ago. Expect him to be in the midfield and shore up things in tight areas.

The captain needs to improve his form in order to lead the team in the right manner and guide them to better results in the future.

Kingsley looks comfortable playing at left wing-back, more so than he was at left-back.

Bowen has been one of the productive players in the team. He was left out for the previous game but should be back for this.

The Pole should come back into the line-up after being excluded against Sheffield United.

With Campbell a doubt for this game, Martin is expected to lead the line. However, the manager would be hoping for a better performance from him. 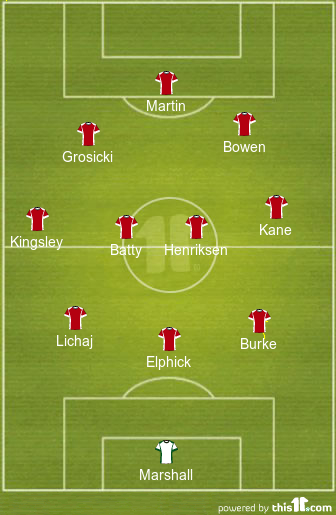