The Merseyside derby is back and the magnitude of the game remains as high as ever. During the corresponding fixture in December, the Reds got lucky after a mistake by Jordan Pickford allowed Divock Origi to score.

This time, the game is at Goodison Park with more at stake. While the Toffees will do everything in their might to stop their city rivals from winning the title, Liverpool can win this game and take a nice forward step towards potential coronation.

Without any further ado, let’s take a look at the combined line-up, featuring players who are fit to take part in this game.

The Brazilian has been a sensation since arriving in the summer. He is surely better than Jordan Pickford.

The local boy has been a sensation since making his Liverpool debut in 2017. He is probably one of the best right-backs in the league and would get into most teams.

With Joe Gomez and Dejan Lovren out, Matip has been doing a fantastic job alongside van Dijk in central defence. On the other hand, Everton’s centre-backs have been mediocre all season.

The Dutchman has been a colossus at the back and would probably get into any back-line in Europe.

The Scotsman is probably the best left-back in the league and easily gets into this combined line-up.

Fabinho is slowly cementing his place in the Liverpool team as a deep-lying midfielder. He slots into this combined XI.

The Senegalese star has had a good season and should partner Fabinho in central midfield.

He is Everton’s top-scorer in the league this season and is a player to fit into any team who are adventurous enough to play attacking football.

The Brazilian started his life at Everton in a perfect way but things haven’t gone his way in the past couple of months. He is still a danger to any defence in the league.

Salah hasn’t been in his best form in the past month but he still remains a top threat to any defence and is a certain starter in this combined eleven.

The Senegalese star was sensational playing the centre-forward role in place of the injured Roberto Firmino. With the latter still in doubt and Everton not having a quality striker, Mane gets his place in this team. 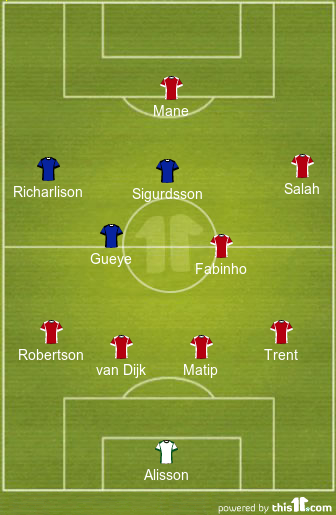