Tottenham coming into this crucial fixture on the back of a couple of embarrassing defeats which has effectively ruled them out of the Premier League title race, leaving just Manchester City and Liverpool to fight it out at the top.

They succumbed to a surprising 2-1 defeat at Turf Moor against Sean Dyche’s Burnley side and were then beaten 2-0 at Stamford Bridge by a motivated Chelsea side who have had a major say in Spurs’ title chances for quite a few seasons now.

They will be hoping to bounce back as they await the visit of their fiercest rivals Arsenal for what promises to be a gritty and thrilling encounter with both teams desperate for three points.

Gunners on the other hand though, are coming into this fixture after a highly satisfying home win against Bournemouth as they thrashed Eddie Howe’s team 5-1 at the Emirates to maintain their grip on 4th place.

With Chelsea just 3 points behind the Gunners with a game in hand and Manchester United hot on their trail as well, it is essential that the Gunners pull off a North London Derby win to maintain a firm hold on the spot.

Here’s a combined XI featuring both Arsenal and Tottenham stars:

The German international has been in decent form over the last few weeks and he of a place in this XI.

Despite his disastrous own goal against Chelsea, the only other option in this position is Stephan Lichtsteiner and hence Trippier makes it to this XI.

The Belgian international centre-half has been in fine form for Spurs and deserves a place in this team.

The Frenchman has contributed to the Arsenal side with some important goals this season and that assures him a place in this XI.

The Bosnian wing-back’s bombarding runs down the left have been one of the Gunners’ prime attacking assets and he makes it to this team ahead of Rose and Davies.

The 23-year-old has been a revelation since making the switch to the Emirates this season to join Unai Emery’s project. An easy pick although Guendouzi is unlucky to miss out.

The youngster has really come to the fore for Spurs this campaign, especially when injuries forced him into the .

The Danish wizard is guaranteed a place in this XI because of the sheer composure and class he shows on the ball.

The former Manchester United star has been in blistering form over the last couple of games and finds a place in this side.

The Frenchman has scored 5 goals in his last 6 Premier League appearances and walks into this team.

Aubameyang has been terrific for Arsenal this season and has performed better than Harry Kane this season. A tough pick, but the Arsenal star makes it ahead of Son Heung-min and Harry Kane. 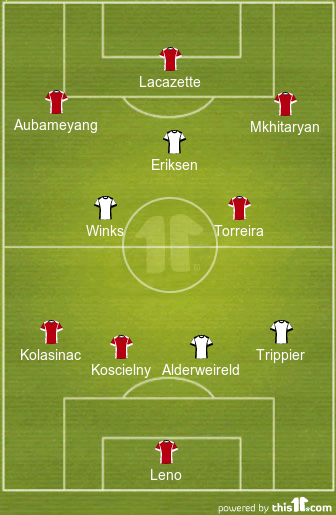