Predicted Chelsea line-up to face Arsenal: Who will start for the Blues?

Chelsea embarked on a new era under Maurizio Sarri with a comfortable 3-0 win over Huddersfield Town. In that game, there were signs as to how Chelsea will play in the games to come. It was surprising to see N’Golo Kante playing a different role in central midfield and scoring a goal.

Arsenal will be a different test for the Blues, especially since they lost their opening game to Manchester City. So, the pressure will be on the visitors to produce a result at Stamford Bridge.

Eden Hazard came off the bench and dazzled straight-away, meaning he could start as a false nine at the expense of Alvaro Morata, who didn’t seem to get his act together.

Ross Barkley blew hot and cold in the last game and we shouldn’t be surprised if Ruben Loftus-Cheek gets a chance to showcase his potential. Meanwhile, Mateo Kovacic is still unfit to start and Cesc Fabregas has a knee injury.

Chelsea spent a world-record fee to sign Kepa from La Liga. He wasn’t tested enough against Huddersfield and may receive a better challenge versus Arsenal.

The Spaniard has adapted to his new role at right-back quite well after been playing as a right-sided centre-back under Antonio Conte. He generally starts every league game for Chelsea and that should be the case this season as well.

The German was comfortable last week and maybe playing in a back-four system suits him better. Expect more of the same.

Luiz was a commanding presence against Huddersfield. However, he needs to be careful about letting players run behind him, as he did against Manchester City.

There were doubts as to whether Alonso could fit in as a left-back. However, the Spaniard silenced his doubters with a fantastic performance last week. He should be a threat from the left-hand side.

The former Napoli man looked at ease with and without the ball. He should receive a start against Arsenal as well.

The World Cup winner surprisingly played as a No. 8 and revelled. He scored Chelsea’s first goal under Sarri to underline his propensity to switch roles and be equally effective.

Loftus-Cheek has done the right thing by staying put at Stamford Bridge. With Kovacic’s presence doubtful and Barkley not up to his game, the 22-year-old may receive a chance to show his worth this Saturday.

Willian looked at ease playing the right-wing role higher up the pitch. He should do well in a playing system suited to aid the attackers.

Morata continues to be shaky when leading the line. Hence, Hazard could be deployed as a false nine, just like what Sarri used to do with Dries Mertens at Napoli.

Read More: Why Chelsea must do everything to stop Real Madrid from signing £200m star

The Spaniard seems to be more comfortable playing passing football, as he did when he was at Barcelona. In Pedro, Sarri has a solid player who understands his preferred footballing philosophy. 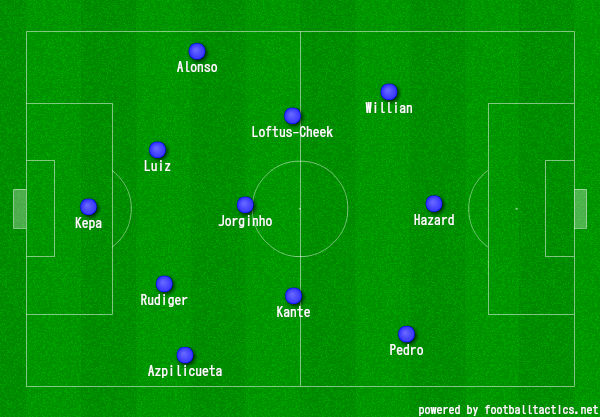