Another match-day in the Championship goes by with several twists and turns taking place. Crazy to think that a single week of games changes the dynamic of the table to a larger extent. Close to 12-13 teams are in the hunt to fight for a promotion spot, as we approach the mid-part of the season.

And if we take a look at the money and fame provided by the Premier League, one would understand why Championship is one of toughest leagues in the world in terms of internal competition. Every team is looking for that elusive spot which allows them to play in the top-flight.

Leeds United are currently leading the queue with 30 points, ahead of Norwich City on goal difference. Sheffield United, Middlesbrough, Derby County and Nottingham Forest round up the top six positions in the standings.

Below we take a look at the Championship team of the week for the games taking place between 2nd to 4th November.

Championship team of the week (2-4 November)

The Dutchman made some vital saves against Sheffield Wednesday and kept a deserved clean sheet in his team’s special 4-0 win away at the Hillsborough stadium.

His runs up and down the pitch from right-back position was impressive. The teenager was involved in one of the goals as well and looked very sharp.

The experienced centre-back was a commanding figure at the back for the Rams. His partnership with Richard Keogh was superb.

Cleared one off the line in miraculous fashion to help Aston Villa beat Bolton 2-0. Chester was immense in general play as well, dominating the opposition forward. Scored the second goal of the night.

The left-back was an ever present danger for Birmingham City. Provided two assists and looked an assured player on both sides of the pitch.

Scored a goal in Norwich’s handsome win over Wednesday and was a constant threat to the opposition defence.

The playmaker was at his best for Villa against Bolton. Scored and assisted a goal and was a real menace in possession.

The loanee from Liverpool scored a free-kick from an outrageous angle (even though it was deflected). Derby’s dangerous player throughout the game.

Came into this game against Wigan off the back of a long-term injury and looked sharp. He was involved in the build up of the first goal.

Scored a brace against Sheffield Wednesday and was a real threat in behind the Owls’ defence. A very fine afternoon for the Finnish striker.

Scored an important winner for Forest in a vital game against in form Sheffield United. 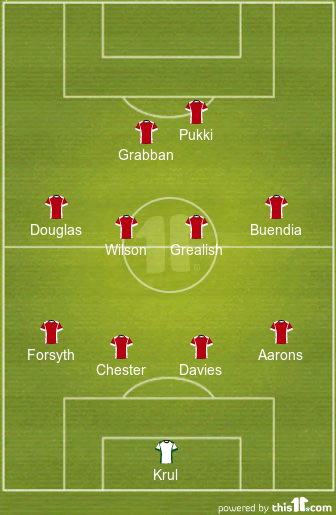