West Brom play host to Sheffield Wednesday on Saturday, with Slaven Bilic’s side looking to extend their lead at the top of the Championship table.

The Baggies have been excellent this season under Bilic and deservedly sit on top of the table. They won 1-0 at Hull City before the international break to maintain their solid start to the 2019/20 Championship campaign.

Sheffield Wednesday, on the other hand, are seventh in the table and will come to the Hawthorns with a mindset to shock Bilic’s side.

West Brom will be without Nathan Ferguson, Romaine Sawyers and Jake Livermore against the Owls on Saturday.

But Gareth Barry, Kieran Gibbs and Chris Brunt all got valuable minutes on Tuesday afternoon as the Baggies’ reserve side hammered their Port Vale counterparts 4-0.

Johnstone is West Brom’s undisputed number one in goal and that would be the case on Saturday as well.

Furlong has done well since being switched to right-back. He is expected to keep his place for this game.

Ajayi has done well in central defence and is a certainty to start against Sheffield Wednesday.

Strong in the air and robust in the challenge, Bartley will look to keep the Wednesday forwards at bay.

With Ferguson still out, Townsend is likely to continue at left-back.

Brunt hasn’t seen much game time this season but with Sawyers and Livermore set to miss the upcoming game, the 34-year-old is expected to start in central midfield.

Limited to just two appearances in all competitions, Harper will be determined to prove his worth to Bilic on Saturday.

Phillips has been in good form this season and should keep his place on the right flank.

Pereira has dazzled on loan from Sporting, adding the cutting edge to West Brom’s attack. He has scored three goals and contributed six assists to help the Baggies to the top of the Championship. A sure-shot starter!

Diangana is so important to the way that West Brom play, and has been outstanding in the midfield alongside the likes of Sawyers, Phillips and Pereira. The West Ham loanee will start on the left flank.

With West Brom already forced to make changes in the midfield, Bilic is likely to stick with Austin when it comes to leading the attack. 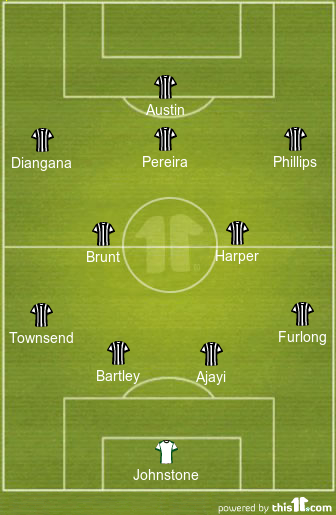