Celtic travel to Romania to face CFR Cluj on Thursday in what is their last group stage game of the Europa League.

The Hoops have already qualified for the Europa League knockout stages and are guaranteed to finish on top of the table. Thus, there’s every chance to see Neil Lennon play the kids so that his top players stay fit and fresh for big games that are coming up.

This is the fourth time this campaign that Celtic and Cluj have met and it was a 1-1 draw in Romania the last time they met.

Celtic have no fresh injury concerns ahead of the game.

With the game at Romania a dead rubber, Gordon could be handed a rare outing between the sticks.

Frimpong is Lennon’s first-choice right-back but it could be Bauer who could start in that position on Thursday.

A reliable player, Bitton could start at the heart of the Hoops defence against CFR Cluj.

Partnering Bitton could be Jullien, who scored the winner against Rangers in the Scottish League Cup final.

Hayes played the League Cup final despite not being fully fit, so Lennon might go with Taylor at left-back for the European clash.

Ntcham hasn’t been a regular starter for the Bhoys this season but he could be handed an opportunity on Thursday.

As Celtic are guaranteed of the top spot in the standings, Lennon could go with Rogic in central midfield.

In Odsonne’s injury absence, Morgan did a decent job in leading Celtic’s attack but he could start on the right wing against Cluj.

Griffiths was surprisingly left out of the Celtic squad for the Scottish League Cup final but he is likely to be handed a start in Romania.

Sinclair has barely played this season due to stiff competition. However, with the Hoops having qualified for the next round, he could get a chance to impress.

The talented youngster has six goals in all competitions this season and should be trusted to lead the attack at the expense of Edouard in the final Europa League group-stage game. 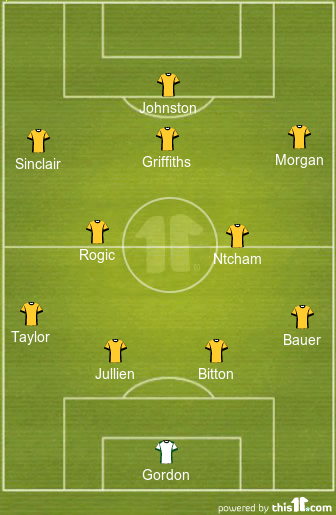