Celtic welcome French outfit Rennes in the Europa League on Thursday looking to make it four wins on a bounce in the competition.

The Hoops qualified for the Europa League’s knockout stages last time out when they sprung a surprise and defeated Lazio 2-1 at the Stadio Olimpico. However, Neil Lennon and company will want to get all three points in the upcoming game to keep hold of the top spot in the group.

Jonny Hayes is expected to miss the game as picked up an injury against Livingston at the weekend. Mohamed Elyounoussi is out too but he could be back to training by the end of the week.

Defender Hatem Abd Elhamed is going to be out for another couple of weeks.

Forster has been excellent in goal throughout the season and deserves to keep his place in the team.

With Frimpong playing the full game against Livingston at the weekend, Lennon could go with Bauer at right-back on Thursday.

Lennon could freshen things a bit in defence and give Ajer rest by handing Bitton a start against Rennes.

With Hayes injured, Taylor could be handed a rare start. The former Kilmarnock man will be looking to impress his manager on Thursday.

Lennon could ring the changes in the midfield as well, handing Ntcham a start ahead of the ageing Brown.

McGregor is one of the first names on the team sheet and will aim to control the game from minute one.

Forrest scored a brace in the victory over Livingston at the weekend. He’ll be confident of replicating something similar against Rennes.

Rogic has to start delivering the goods if he is to keep his place in the team.

Christie has been an ever-present in Lennon’s starting XI this season. The Scotsman will be key for Celtic in opening up the Rennes defence.

After playing for just more than 20 minutes as a substitute against Livingston, Griffiths could be handed a start against Rennes. 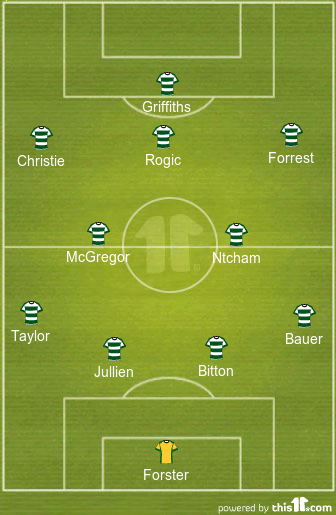