Derby County resume their Championship duties on Wednesday as they face Millwall at Pride Park.

The Rams were knocked out of the FA Cup at the weekend by Brighton, who won the game 2-1 at the Amex. But that shouldn’t bother Frank Lampard as his sole focus should be on helping Derby achieve promotion to the top-flight.

Millwall, meanwhile, come into Wednesday’s fixture after qualifying for the FA Cup quarter-finals with victory at AFC Wimbledon.

Lampard has no fresh injury concerns ahead of the game against Millwall.

Since replacing Carson in goal, Roos hasn’t put a foot wrong. He will start on Wednesday against Millwall.

Bogle has been a regular fixture under Lampard and and is expected to start this crucial tie.

Keogh has been a rock at the back for Derby this season, forming a solid partnership with Tomori. He is expected to start Wednesday’s game.

Tomori has impressed a lot under Lampard this season. The youngster will partner Keogh at the heart of the Rams’ backline.

With Forsyth out for the season, Malone is an undisputed starter at left-back.

Bryson’s energy and tenacity helps the Rams tick throughout and will need to put in a strong show against the Lions.

Huddlestone brings a lot of calmness and balance to the team. His experience will be handy for such a big game.

Holmes will start in the midfield three and look to impress the manager in midweek.

Wilson has been one of the consistent players for Derby this season. His speed, creativity and movement in the final third made him one of the first names on Lampard’s team sheet. The Welshman will start on the right wing against Millwall.

Another pacey customer but hasn’t quite lived up to the expectations, Jozefzoon will look to give the Millwall defenders a torrid time and guide the Rams to all three points.

Waghorn could be given the nod ahead of the fit-again Marriott to lead Derby’s attack purely due to current form. 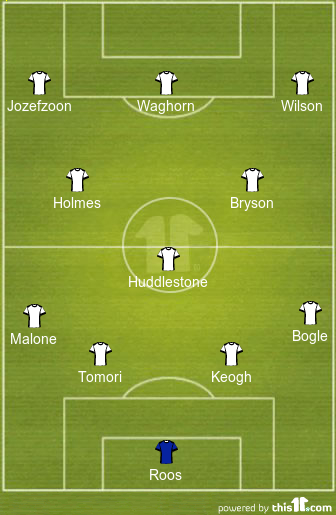