Another chapter of the Chelsea-Tottenham derby will be on display tomorrow as both teams seek to get over their weekend defeats. Spurs lost to Burnley in the league to virtually end any hopes of winning the title, while Chelsea lost the Carabao Cup final to Manchester City on penalties.

Currently, Maurizio Sarri’s men are sixth in the table, but have a game in hand, while Pochettino’s men are third and would be aiming to get back to winning ways to put any sort of pressure on the top two.

There are quality players in both teams, hence, making a combined line-up would be a tough job. But here’s who makes it to this combined XI.

The Spurs keeper and World Cup winner is better than Kepa Arrizabalaga. Hence, the former is picked ahead of  latter.

Kieran Trippier and Serge Aurier are good going forward but suspect when it comes to defending. Thus, Azpilicueta gets the nod ahead of them.

The German has had a good season so far despite the defensive frailties of the team. So, he gets into this combined team.

Vertonghen has been in good form on the left-hand side of the back three. He would be an ideal partner for Rudiger.

Marcos Alonso has been a train-wreck this season, while Emerson hasn’t played much to get ahead of Danny Rose in this team.

The Tottenham man has done so well in the past couple of months. He has kept Eric Dier out of the team.

The Frenchman is a no-brainer selection in central midfield. His energy, ball-winning abilities and work rate are advantageous to the teammates around.

The South Korean has been in top form since the turn of the year. His goalscoring prowess is right up there with the best in the league.

The Dane is a perfect player to operate in between the lines and use the ball in the best possible manner to feed key passes to the attacking players.

Hazard played well against Manchester City in the false nine role. However, we are well aware of the fact that his best position is on the left wing.

The Englishman returned to fitness and scored against Burnley. He is certainly better than Gonzalo Higuain and Olivier Giroud. 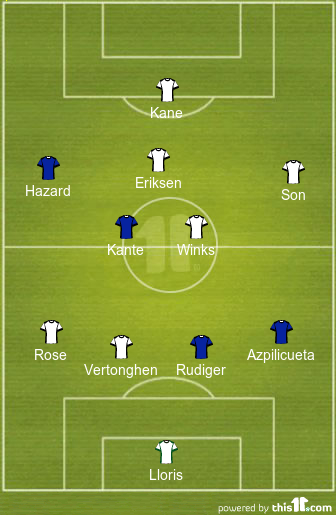